In what looked like a scene from a brooding graphic novel, the over-intentionalized alterna-hip Angel and blonde dame Holly kissed for photographers at the premiere of his new Cirque du Soleil Vegas show “Criss Angel: Believe,” confirming a relationship that had been rumored for a few weeks. 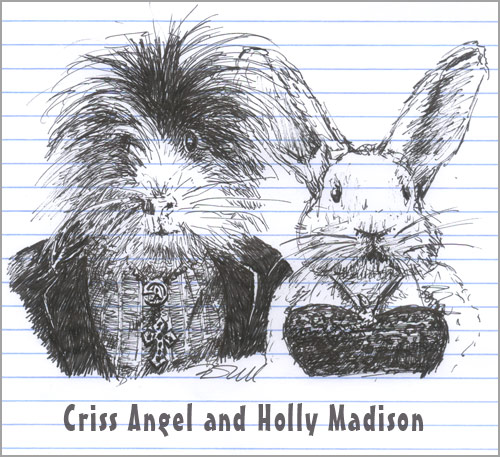 The move is a clear step down for Madison, who goes from being one of three Hugh Hefner lovers (Holly Madison, Bridget Marquardt and Kendra Wilkinson) to one of two Criss Angel lovers (Holly Madison and Criss Angel). You might think otherwise because Hugh is 82, but the man has the heart of a 40-year old! Criss is 40 but with the personality and style of a 15-year old. One positive thing for Holly is that she won’t have to worry about feeling “not so fresh” because she’ll be spending so much time with a douche. (It may require prescription drugs to get rid of that “not so smart” feeling dating Criss Angel can give you)

(We’re not sure if this is a positive or negative, but apparently The Girls Next door doesn’t have as many bunnies as “Chris Angel: Believe.”)