Starcasm’s investigative reporters have been digging through trash cans, tapping phone lines, reading lips, and completely making stuff up so that we could bring you the New Year’s resolutions from some of our planet’s biggest celebrities! So let’s see how these famous folks finish the line: “In 2009, I resolve to…”

Perez Hilton – get my head three inches further up the asses of the Hollywood elite.

Tara Reid – buy some skin spackle, or take up surfing so I can have an excuse to wear a wetsuit at the beach.

David Beckham – do SOMETHING to justify my $250 million contract and become more than “Posh Spice’s husband.” 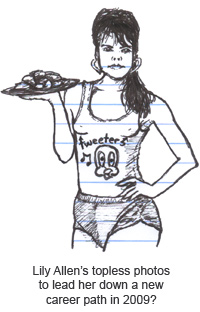 Lily Allen – apply for a waitress job at Tweeters.

SNL – write one funny skit that doesn’t rely on a former cast member or a funny-no-matter-what host like Christopher Walken or Alec Baldwin.

Alec Baldwin – continue to be funny as an overconfident blowhard on television, in the movies, and in real life.

Heather Locklear – do WHATEVER it takes to revive the Amanda Woodward character on the CW’s resurrected Melrose Place.

Julia Roberts – star in a movie that doesn’t have a plot that somehow centers on how beautiful I am.

Lindsay Lohan – be the very last person still on MySpace.

George W. Bush – relax like hell! Watch sports and drink my ass off!

Guy Ritchie – relax like hell! Watch sports and drink my ass off!

Nancy Grace – make it until 2010 without talking about anything but Caylee.

Steven Colbert – hire a team of comic experts to come up with some way to keep Bush hate relevant and funny. Try to think of SOMETHING, ANYTHING bad to say about Obama.

Britney Spears – record an album that isn’t just a single with 12 b-sides. Stage another comeback.

John Mayer – keep having sex with Rachel from Friends and that hot waitress from Office Space, while continuing to have a strong Bromance with Pete Wentz.

Pete Wentz – stay with Ashlee all year, as long as she’s still hot, while continuing to have a strong Bromance with John Mayer.

Bronx Mowgli -match the combined IQs of my parents by month nine, and surpass it by the time I turn one.

Bill Clinton – sleep with a secretary without getting in trouble (Secretary… of STATE! Yee haw!)

Jonas Brothers – get through one more year with our fans still thinking we don’t have sex.

Heroes – concede that Melrose Place is the only place where poor writing and constant shark jumping make for a successful television show.

Garth Brooks – fix all of America’s problems by coming out of retirement.

Sarah Palin – learn the ability to laugh at myself and admit when I might could have done something better. I personally don’t see any reason for either, but my 2012 campaign manager seems to think it’s important.

Jennifer Aniston – let folks enjoy their holidays in 2009 by not promoting a movie that comes out on Christmas Day.

Rod Blagojevich – take some self defense classes, just in case.

Starcasm.net – be a little less awesome.