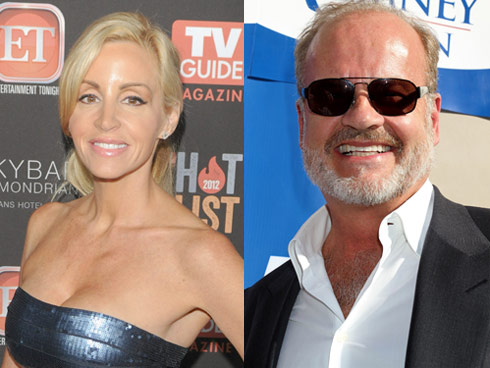 The very public divorce of Kelsey and Camille Grammer has had its share of strange twists and turns and the latest coming from Hollyweird is yet another oddball chapter.

Camille has filed an emergency order to keep Kelsey from moving into the 10,000 sq, ft.+ mansion the two used to share. Apparently, Kelsey wants to set up shop in the old home place with his new family even though he bought another house in the same zip code.

The Grammers have been trying their best to unload the property but can’t find buyers (I know the feeling). The property in question is currently listed at a cool $16 mil (I don’t know that feeling).

Sources for TMZ stated that Camille fears if Kelsey moves in, the digs will be even harder to sell. According to the divorce agreement Camille will get half of any profit from the sell, so consider the Real Housewives of Beverly Hills star motivated.

The judge didn’t issue an order, instead deciding to schedule a hearing for next month. As for why Kelsey wants to move back in even though he has another place close by to rest his head? Who knows?