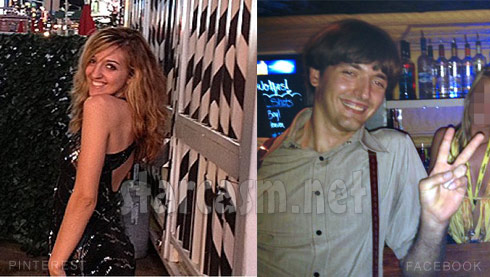 Unlike the original Breaking Amish cast, the backgrounds of the cast of TLC’s Breaking Amish: LA have remained a mystery outside of what the network has provided in official bio information and shown on screen. We had some snippets of Iva’s English life (thanks mostly to the fact that she also appeared on the original Breaking Amish as Jeremiah Raber’s girlfriend/fiancee) and last week we uncovered Elizabeth “Betsy” Byler’s wedding photos with Allen Yoder. Now we’ve discovered the last name and internet social media profiles for brother/sister duo Samuel and Lizzie!

It’s Samuel (Sam) Stoltzfus and Lizzie Stoltzfus and it appears that both of them were fairly comfortable living the “English” life prior to doing the show, although Samuel never seemed to fully separate himself from Amish fashion (e.g. suspenders) or their hair style. Here’s a photo of both Samuel and Lizzie together that was uploaded to Facebook in July of 2012. In the picture you can see Samuel rocking his bowl cut and enjoying a beer, and Lizzie looks almost identical to her post-makeover look from the Breaking Amish: LA makeover episode — which is pretty damn great! 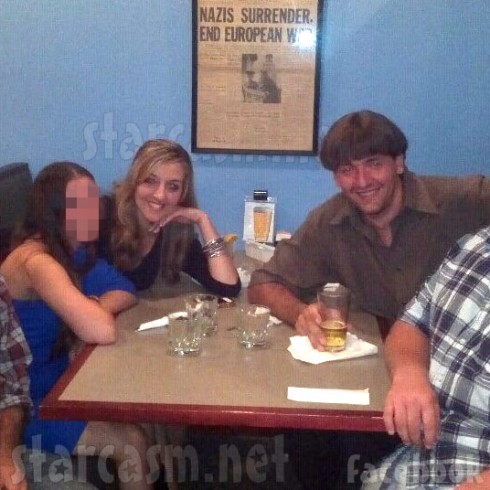 The girl in blue with her face pixelated is apparently a close friend of Samuel’s and appears in about 90% of his public pictures. She was originally born in Romania, but appears to have joined the Amish community in Lancaster, Pennsylvania because in a lot of the photos she is wearing traditional Amish attire: 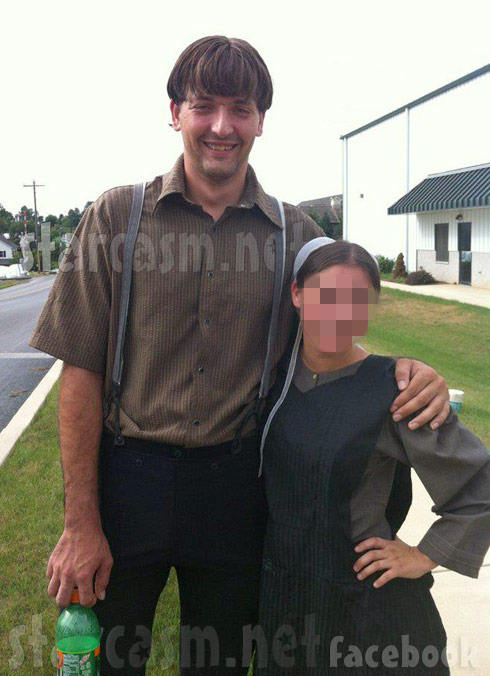 Of course, in some photos she’s wearing clothes that would have to be described as English: 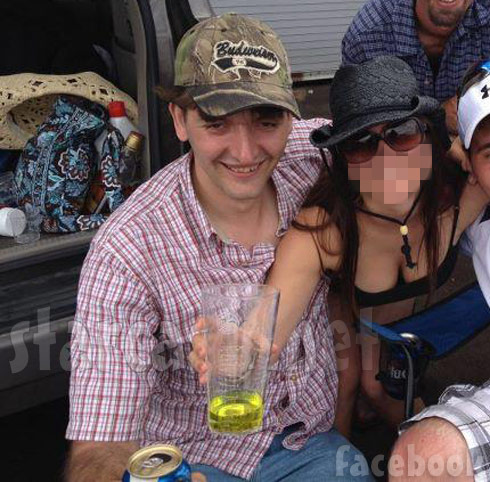 Lizzie appears to have deleted everything from her Facebook profile (I believe this is it) but a few of her social media accounts are still active, including a pinterest account to which she uploaded a photo collage that included these two images of herself wearing a super-sexy mini-dress and thigh-high leather boots: 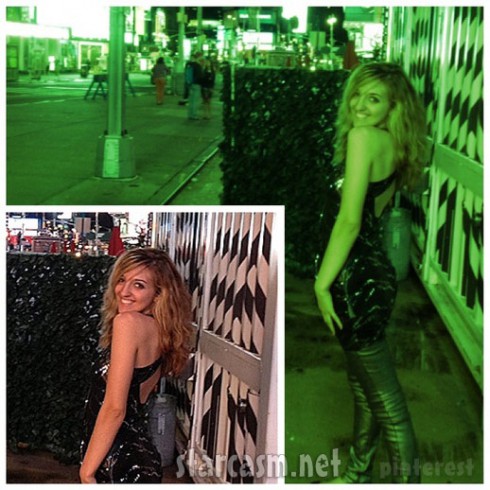 The collage include the words, “Let ur true colors shine!!” with a small rainbow icon and multiple mono-tint copies of the same photo.

The photo was uploaded over 10 months ago, so it’s clearly not post-show-makeover. And just for fun, I figured I would put together a before-and-after-and-after-after tryptic of Lizzie with the pinterest photo, a TLC promotional photo of Lizzie prior to breaking English, and a photo after her on-screen makeover: 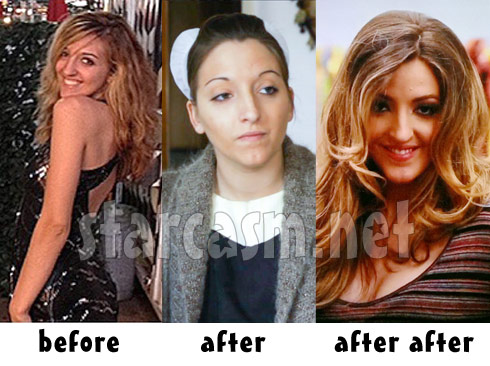 For me the photos leave me in awe of TLC (and Hot Snakes Media’s) makeover skills, not because of the “after after” photo, but because of the middle photo in which Lizzie has been made under into a young practicing Amish woman!

Now back to Samuel, who still has tons of photos online. The oldest one is from June of 2010 and features Samuel, who apparently is a big hockey fan, holding the Calder cup from the AHL: 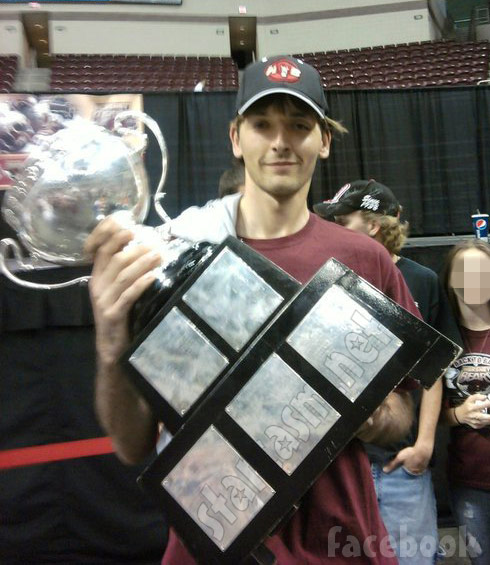 And for you gals who have fallen for Sam’s chivalrous ways towards his sister Lizzie on the show, here is a photo with a little good news and a little bad news. The litte good news is that you get to see a big chunk of Sam’s hunky bare chest. The bad news is that he has his Romanian girl friend Kathryn’s name written there, prefaced by “I ♥” 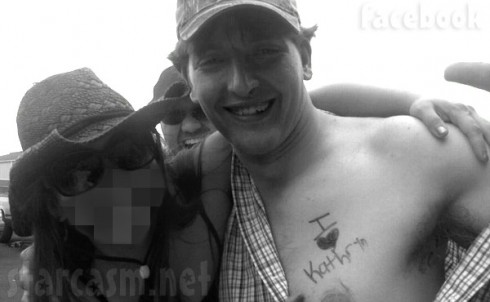 And since we did Lizzie, I felt obligated to to a little before-and-after-and-after-after collage of Sam for you: 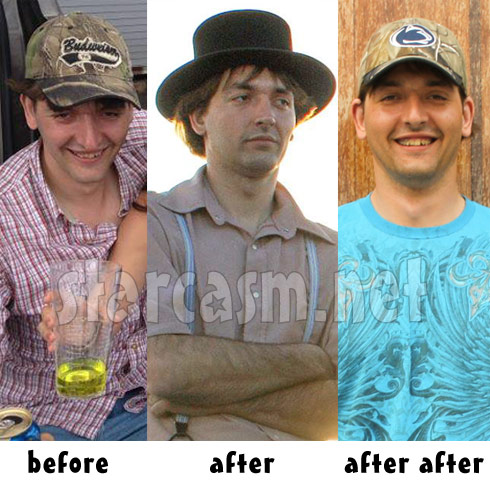 As far as Earth-shattering discoveries (divorces, previous children, etc) there wasn’t much for Sam and Lizzie. I did find a baby registry for “Liz Ann Stoltzfus & Hoj James” at Target that listed a birth date as June 28, 2013 in Hyattsville, MD. I can’t verify that is our Lizzie, but her middle name is Ann and the timing seems to fit.

Sam appears to be quite the athletic type, enjoying cycling and snow boarding as far back as 2011. He also has photos of himself at hockey and football games in Pennsylvania.

Know anything about the Breaking Amish LA cast before (or after) the show? Drop us a line at starcasmtips (at) yahoo.com