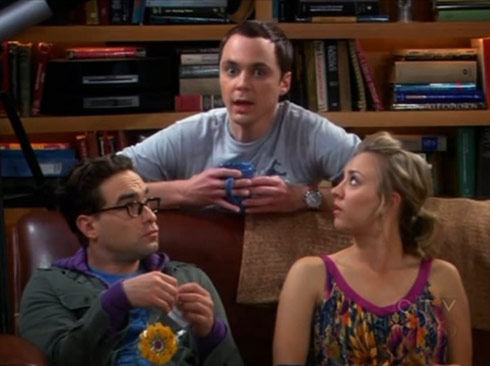 It doesn’t take a theoretical physicist with the incomparable brain functions of Sheldon Cooper to know that The Big Bang Theory is an important ratings juggernaut in CBS’ lineup. According to a report from Radar, stars Jim Parsons, Johnnny Galecki and Kaley Cuoco intend on banding together before the September 26 Season 7 premiere to demand significant pay raises.

The trio will be looking for paydays upwards of half-a-million dollars per episode across the scheduled 24-epsidoe season. In addition, they will be requesting a percentage of the syndication profits just as they received during their last negotiations.

“They know the critical position Big Bang holds on CBS’ prime-time schedule and the only thing preventing them getting what they want would be a spectacular ratings demise this season. That isn’t about to happen anytime soon. They’ll put on a united-front during negotiations.”

The comedy is nominated for 8 Emmys and closed out its 6th season with 18.6 million viewers and a 6.2 rating in the all-important adult 18-to-49 demographic, making it the top comedy in both measures.

It seems but a virtual certainty that the stars of Big Bang will get every “penny” they’re looking for.

On a joyful sidenote, TV veteran Bob Newhart, 84, won his first Emmy for his guest appearance as Professor Proton on Theory. In an emotional acceptance speech during the creative arts Emmy ceremony held Sunday Newhart said, “This is my seventh shot at this. … I just love this very much.”

Just like the big pay for the stars of Big Bang, that award is cosmically warranted.