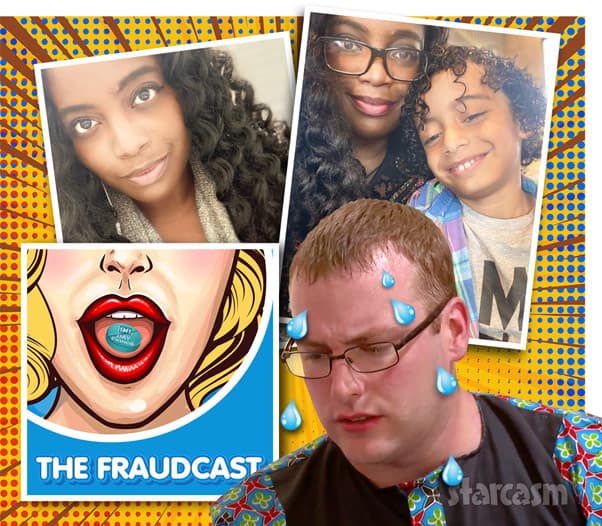 On the most recent season of 90 Day Fiance: Before the 90 Days, viewers were introduced to Benjamin, a 33-year-old single dad from Phoenix, Arizona. Benjamin was traveling to Kenya to meet his future fiancée Akinyi, but their potential happily ever after would encounter numerous speed bumps along the way. In addition to the vast cultural differences and a language barrier, Benjamin was also a bit strapped for cash due to his financial obligations regarding his five-year-old son Grayson. Or at least that is the story that we were given by Ben and producers.

Ben’s ex-wife has posted online during the season about some of the inaccuracies (and accuracies) of what we saw this season in regards to Ben’s situation in the United States, and she just sat down with Katrina (aka @FraudedByTLC) on the newest episode of the The Fraudcast podcast to further distinguish fact from fiction.

Prior to her interview with Katrina, Ben’s ex (who goes by the alias Hanekawa Dravon / @cactus_fruit_juice on Instagram) served as co-host talking about all the latest news and gossip in the 90 Day Fianceverse this week. As it turns out, Hanekawa has quite the legitimate 90 Day Fiance podcast co-host resume! In addition to being a long-time fan of the show with contagious enthusiasm for all the craziness surrounding the many franchises, Hanekawa is also funny, insightful, and humble. Oh, and she has a great voice to boot! (I am guessing we will see her return again as co-host some time in the near future, especially given the fact that Katrina’s initial co-host is no longer available thanks to her own criminal fraud scandal.)

I encourage you all to listen to Katrina and Hanekawa discuss all the latest tea, but if you want to jump right to the interview portion, it begins around the 43:00 mark.

5AM selfie trying to hype myself up for another 8 hour meeting ? How about a GTKY!? What is your favorite part of your career/job. If you’re a student, what is your favorite study area? If you’re unemployed or stay at home folks what are you’re hobbies? I figure if I have followers now, it’s an opportunity to get to know people ? I’m a Project Manager, PMP, for those familiar. My job is challenging but I enjoy it a lot. My favorite part is the variety of projects I get to be a part of, and the learning opportunities that come from managing them. My side gig has been photography. I’ve managed my own photography business since 2012. I absolutely love being behind the camera ? and I am forever working to improve my skills. . . . . #gtky #tuesday #tuedayselfie #selfie #flowercrown #flowercrownfilter? #SAHM #SAHD #hobbies #career #careergoals #gettoknowme #gettoknowyou #projectmanagement #projectmanager #business #meetings #processimprovement #businesswoman #pmp #hashtaghashtag #letmeknow #snapchat #snapchatfilter

HOW DID BEN AND HIS EX-WIFE MEET?

Hanekawa says she first met Ben when she was finishing up her junior year of college almost ten years ago. They dated for roughly seven months before Ben proposed. Unlike the quickie Kenyan marriage to Akinyi, it was about two years before Hanekawa and Ben got married in 2012.

Before their marriage, Hanekawa and Ben moved to Wisconsin for four months so that he could pursue a job opportunity that “failed miserably.” They moved back and in with her mother and got married shortly after.

A month after getting married, Hanekawa got pregnant with Grayson. Grayson was born in the summer of 2013, and it was approximately a year later that she realized she no longer wanted to be in a relationship with Ben. Within six months the couple had separated, and the divorce was finalized not long after. She says that when she left pretty much all she took was a Playstation, a TV and a bed frame.

As viewers are aware, Ben mentioned that their marriage fell apart due to “trust issues” — which seemed to suggest that there was infidelity involved. Katrina says that she spoke with Ben’s brother who revealed to her that Ben cheated on Hanekawa! Hanekawa would not confirm that claim, but she did confirm that there was cheating involved and she filed for divorce due to trust issues. I think it’s pretty easy to read between the lines there.

The next topic centered around Benjamin’s financial issues, including the fact that he has been evicted from his apartment twice and had his car repossessed. Hanekawa says she was aware of one of the evictions, but not the other. She says she was also aware that Ben was having financial issues with his car because she began to receive calls from people looking to collect on Ben’s debt due to the fact that he listed her as a reference when he purchased the vehicle.

So how was Ben able to afford a trip to Kenya when he can’t even afford to keep his car? “I have no clue,” Hanekawa admits. She suggests that perhaps renting a room from his pastor has allowed him to set a little money aside.

THE TRUTH ABOUT BEN’S CHILD SUPPORT

How much of Ben’s financial issues are due to child support and other expenses associated with his son Grayson? Hanekawa says the answer is pretty close to none of it. As she has stated previously online, Benjamin does not pay any child support. But, she is quick to clarify that he is not obligated to pay any child support according to their custody arrangement.

Hanekawa reveals that she and Ben technically share 50/50 custody of Grayson, and as a result, he is not obligated to pay child support. However, she says that in reality she has Grayson all week and Benjamin only has him on weekends. Plus, Hanekawa points out that with the 50/50 split, Ben IS obligated to help pay for things like Grayson’s school, insurance, and after school. She says he doesn’t pay for any of that.

After it was initially revealed that Ben was playing the “sympathetic single dad straddled with child support expenses” card, Hanekawa reacted with a couple angry responses on social media — something that seems a bit out of character if you listen to her on the podcast.

She explains to Kristina that seeing Ben portrayed as the struggling single parent was extremely frustrating for her because SHE was the one who struggled — ate and lived cheaply, worked two jobs, etc. — because he wouldn’t. The frustration outweighed her awareness of this being “just” a show, and she felt she had to speak out. She describes it as feeling like all of the effort she had put into raising Grayson and providing a stable home for him was being taken from her and handed over to Ben.

I seems Ben’s financial situation and past relationship history isn’t being portrayed completely accurately on the show, although it isn’t nearly as far from the truth as numerous other 90 Day Fiance franchise cast members. But what about Benjamin as a person? His personality?

Hanekawa says that the Benjamin we see on the show, as far as how he acts and his personality, is spot on. She mentions the awkward bride price haggling scene as an example. She says that is pretty much exactly how Ben would react in that sort of stressful and confusing situation.

Ok so for real this has been a tough week! Work has completely drained me and I’ve been running in 4 hrs of sleep every night. But something totally exciting – G lost his first baby tooth!! This thing has been loose for almost a month! Finally while brushing his teeth it just decided to come out. He was scared at first (blood scares everyone right?) but then he was stoked because #toothfairy was coming! ? ?‍♀️ ? she left 2 bucks and now he feels rich. ?

WHY LET GRAYSON BE ON THE SHOW?

Given that she was a big fan of the show and was aware of the rabid fan base, why did Hanekawa agree to allow Grayson to be on it? She says that she did want to make sure that her son was not exploited by producers and points out that Grayson was only featured in one scene in one episode. “I know that TLC doesn’t really do wrong by the children,” she adds. (To her credit, Hanekawa is pretty much spot on with that assessment, and Grayson was no exception.)

“I have not spoken to her. I have not met her,” Hanekawa says of Akinyi. “I look forward to it,” she adds, “because it’s hard to form an opinion based on what was shown on TV.” In the end, Hanekawa wants only good things for Ben and his Kenyan bride. “If they’re both happy, then good for them.”

To find out what else Hanekawa has to say, be sure to check out the full episode of The Fraudcast titled “Who Wants To Be Famous For Being Ben’s Ex?” Here are some of the other topics she addresses in the interview:

What is Ben’s history with alcohol? Was/is he a drinker?

Was Ben controlling with her in their relationship?

Who are her favorite couples from all of the 90 Day Fiance shows?

How does Ben manage things like picking Grayson up and dropping him off if his car was repossessed?

Ben suggested during The Couples Tell All that his family was not supportive of his relationship with Akinyi. How true was that?

In addition to the podcast itself, you can also pick up some mighty fine Fraudcast swag over in their shop! (Who doesn’t want a “So much beautiful!” makeup bag? No, it isn’t red, but still!)

BEFORE THE 90 DAYS David’s Ukrainian boo Lana has LOTS of online dating profiles!