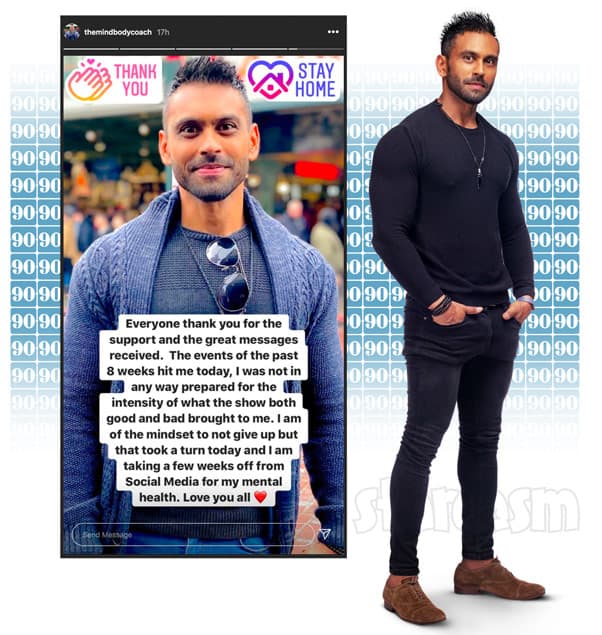 The 90 Day Fiance franchise is one of the most talked about (and memed about) TV franchises on social media. Unfortunately for some of the cast members of the various shows in the franchise, a lot of the posts on social media can be a bit harsh — and sometimes downright vicious. Current Before the 90 Days star Ash Naeck is a relationship coach, and it seems that the 38-year-old Australian has determined that his relationship with social media is a toxic one as he announces he is taking a few weeks off for his mental health.

The announcement came via Ash’s Instagram stories soon after the most recent episode aired featuring a scene in which he tells his American girlfriend Avery that he is a single. “Everyone thank you for the support and the great messages received,” Ash’s announcement begins.

Here is the rest of his announcement:

The events of the past 8 weeks hit me today, I was not in any way prepared for the intensity of what the show both good and bad brought to me. I am of the mindset to not give up but that took a turn today and I am taking a few weeks off from Social Media for my mental health. Love you all ❤️

Ash’s message has caused concern because it suggests he was considering “giving up” when he made his decision. It’s unfortunate that he felt the need to leave social media completely, but it sounds like the right choice.

As mentioned above, the 90 Day Fiance fan base can be quite harsh on social media. That harshness has been multiplied for the current season of Before the 90 Days as the entire country shelters at home during the coronavirus pandemic — which has resulted in the already-high ratings for the show going through the roof.

Judging from what we’ve seen on the show, and based on his previous social media interactions, Ash seems like someone who likes to address criticism. Being of the belief that negativity can be addressed and diffused rationally may be a great approach for one-on-one relationships, but it is a disastrous belief when it comes to the negativity of millions online.

In case you missed it, Ash previously addressed some of the criticism he was receiving online due to his bulging eyes and other mannerisms by revealing that he has been diagnosed with a hyperactive thyroid. “I want to thank the few of you who were super nice and nurturing in reaching out and bringing this to my attention in the most caring way possible,” Ash wrote late last month, “and for the majority or the rest that came in with so much hate and cruel intention whether bloggers or individuals, I still send you love no matter how fu**ed up your intentions towards me were ❤️.”

We wish Ash all the best, and hope to see him back on social media soon — rejuvenated and reinvigorated with his trademark positivity.