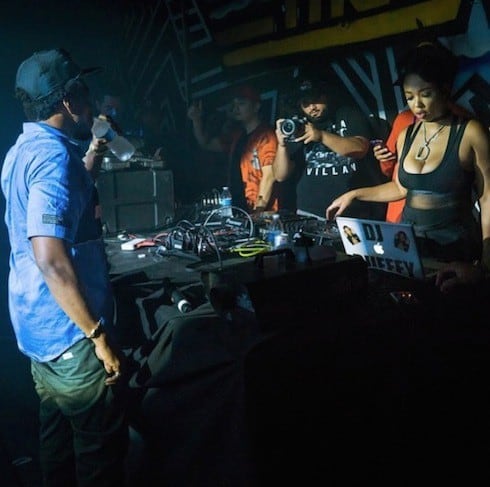 Is DJ Duffey still engaged? You could be forgiven for assuming that things between Duffey and her fiancé, NBA agent Iman Shokouhizadeh, had fallen apart, considering how tense the drama between Duffey and her Basketball Wives LA castmates has gotten. But, despite a recent dressing-down from star (and creator, and executive producer) Shaunie O’ Neal, the Dallas-born, LA-based entertainer has a ring from the love of her life–so she’s got no worries at all.

Duffey gained nationwide prominence last year, when Amber Rose chose her to DJ her now-infamous Slut Walk. By that point, Duffey had already made the jump from Dallas to LA, and came out West fully intending to “take over the scene and make a bigger name for herself.” A spot as the newest cast member for BBWLA Season 5 fit nicely with her plans; unfortunately, that’s not always the case for her co-stars, with whom DJ Duffey has clashed on the regular since her introduction. Most recently, Tami Roman didn’t care for Duffey’s directorial style when it came to Jazz’s music video, so she fired her and then got up in her face about it:

And Basketball Wives LA creator and general guru Shaunie O’ Neal recently dropped that it “wasn’t her decision” to have Duffey–real name Latasha–join the cast in the first place. (To be fair to Duffey, that fact had more to do with the drama between Shaunie and Brandi–but it’s never great when the boss lets you know you weren’t her first choice.)

But Duffey has yet to clap back on social media. Instead, she’s made it clear that her priorities lie elsewhere:

“My engagement ring is huge,” Duffey gushed to The Snobette shortly after BBWLA Season 5 began filming. “My fiancé knows I’m from Texas and that’s just my taste.” She added, “I’m very into bling[;] I wear a big Versace necklace.” But, lest you think she’s all flash and no bang, Duffey made it very clear where her passion resides:

If you’re a female DJ who is attractive and whose skills are not that great and you’re getting booked, I can’t hate on that. You’re lucky. I can’t hate on the next women who’s doing something she loves. I was once that girl. I got booked off of looks and popularity, but now I can say I’m great at what I do and I can DJ anywhere in the world and kill it. And I wouldn’t be able to say that today if people didn’t give me the opportunity when I wasn’t great….You have to take the craft seriously and there are some females who do and those who don’t and those who don’t will be exposed.

You can follow DJ Duffey on Twitter by clicking here, on Instagram by clicking here, and on YouTube right over here. And you can check her out on televisual form when Basketball Wives LA airs Sunday nights on VH1.

How much does Shaunie O’ Neal make? Net worth for VH1 mogul soars thanks to new show