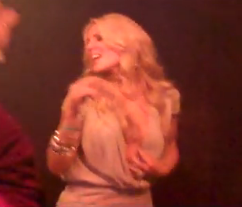 Gretchen Rossi is not stopping her crusade to be a singing Real Housewife (how many of these can the world possibly hold?)

Last year she released “Nothing Without You,” a tribute to her late fiance Jeff Bietzel.

Her new tune is a dance mix called “Revelation.”

Catch the revelatory magic below:

This video was actually put up over 7 months ago in August, but no one’s really noticed.

As Andy Cohen says, it sounds “Autotuned to hell,” but Gretchen says she specifically requested that the song NOT be put through the Autotune program so it would sound the same live.