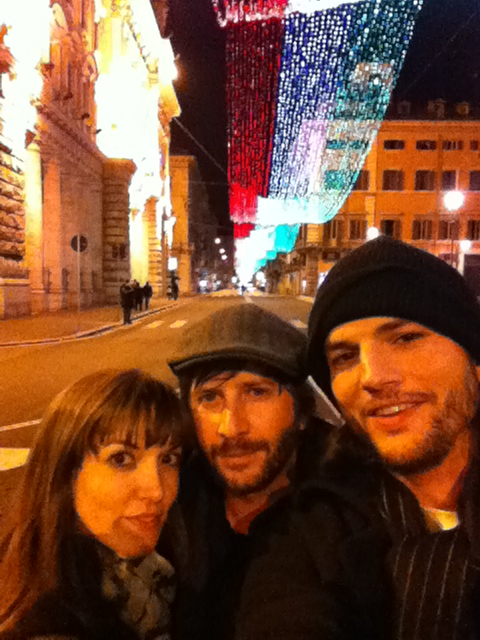 Fresh off of his marriage to Demi Moore, Ashton Kutcher seems to be going strong with a new girl since at least December.

December 26, 2011 @aplusk tweeted this photo of himself with screenwriter Lorene Scafaria while on a “Roman Holiday” in Italy. (The dude is his Katalyst business partner, Matt Mazzant.)

Who is Lorene Scafaria? Is this new relationship serious?

Ashton has insisted that the relationship with Scafaria is platonic, but gossipers have been whispering that they’ve been displaying PDA at the events they attend together when they think no one’s watching. They attended the post-Oscar party together that Demi Moore used to host, and sources told US Weekly that they were affectionate with each other, holding hands, and she rubbed his neck and back (wait a minute, why didn’t he rub HER neck and back?) This past weekend they were spotted arriving together at a laser tag place, Ultrazone, in L.A. They left with their faces painted. This little bit proves nothing, but it IS a little odd for platonic friends to do date-like things like play laser tag alone.

lot of fuss has been made about the age difference between Ashton and soon-to-be ex-wife Demi Moore, but that shouldn’t come into play at all with Scafaria; they’re both 33. Before her “friendship” with Ashton, Scafaria was dating The OC actor Adam Brody, but now that’s reportedly kaput.

Lorene Scafaria’s been trying to get a toe-hold in the entertainment industry for a while, as an actress and writer (she also sings,) but her big break was adapting the screen play for the lovable hipster flick Nick and Norah’s Infinite Playlist. She also contributed a song to that movie, you can listen to her music on her MySpace page (Yes, I just said MySpace.)

Ashton and Lorene met a year ago while Ashton was still with Demi, and Loreen was with Adam Brody during a reading for her upcoming rom-com Seeking a Friend for the End of the World, and they’ve reportedly had their eyes on each other ever since.

In other Ashton-Moore news, Demi is out of rehab, AND home from her post rehab vacation. Ashton recently supported Demi’s daughter Rumer Willis at a concert at The Sayers Club in Hollywood. (Rumer sings too, everybody sings)