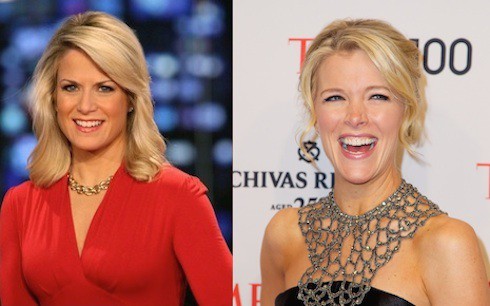 Are Megyn Kelly and Martha MacCallum related? It seems there’s been some confusion on this point of late, thanks possibly to Kelly’s high-profile battles with Republican standard-bearer Donald Trump. However, it seems that Fox News’ two blonde on-air personalities do have quite a bit in common beyond looks that could justify confusing them, at a distance, for sisters.

To begin with, both women hail from upstate New York: Megyn was born in Syracuse, on November 18th, 1970; Martha was born in Buffalo on January 31st, 1965. Both women spent their formative years in the Empire State, and were educated there, too. In fact, both Megyn Kelly and Martha MacCallum have degrees from prestigious New York schools–Megan graduated from Syracuse University, Martha from St. Lawrence University–and they each majored in political science. (In addition, Megyn got a JD from Albany Law School in 1995.)

Personally, both women have three children. Professionally, they’ve each hosted a Fox News show with “America” in the name: Kelly’s America Live ran from 2010 to 2013; MacCallum has co-hosted America’s Newsroom since 2010. And, oddly enough, both Fox stalwarts are secret (ish) Stephen Colbert fans. In fact, Martha MacCallum was in the front row for Colbert’s debut as the host of The Late Show last September; as she later told a colleague, she was sitting right there with Colbert’s family during the taping.

“His wife and I have been friends for more than 20 years and I was there when Stephen and Evie met,” MacCallum told a shocked Bill O’Reilly. “Our families are very close friends. Our kids were born at the same time.” And, when O’Reilly asked her if the MacCallums and the Colberts socialize and / or barbecue together, Martha’s answer was dead serious: “Definitely.”

Megyn Kelly, never one to be left out, also knows how to party, Colbert-style:

However, one thing Megyn Kelly and Martha MacCallum do not have in common: parents.