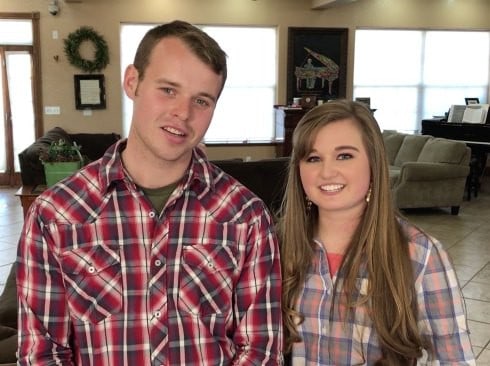 This weekend is turning out to be a Duggar wedding extravaganza! After breaking the news that Joy-Anna Duggar wed Austin Forsyth on Friday, another Duggar has gotten engaged!

“We are super excited. It’s great to not be courting anymore, now we’re engaged!” the couple revealed to People.

Kendra admits she was taken back by the proposal. “I’m so happy and so shocked. There’s so many words I want to say, but just shocked.”

“I was definitely nervous going into it, but I wasn’t afraid that she was going to say no, because she has said, ‘I’m just waiting on you!'” Joseph explained.

The pair announced their courtship in March after “talking for about six months.”

If you’re having a hard time figuring out who Joseph is, you’re not alone. He’s the 7th Duggar child falling in birth order between Jinger and Joy-Anna. Here’s a handy chart we created a couple of years back to help you keep track of all the Duggars.

If Joe follows in the footsteps of his siblings, the couple will be walking down the aisle in the coming months. Congrats to Joseph and Kendra!

No doubt the next Duggar engagement will be featured on the upcoming season of Counting On when it returns on Monday, June 12th on TLC.

Is 19 Kids and Counting’s Jessa Duggar engaged to Ben Seewald?

Lauren and Josiah Duggar reveal she had a miscarriage in October