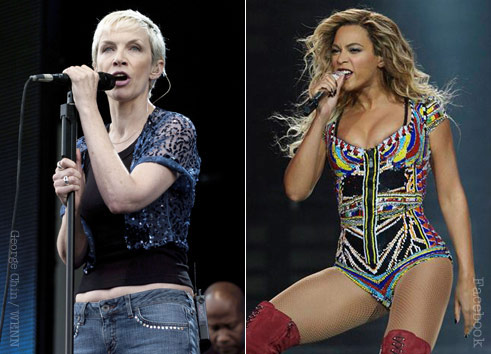 In a thought-provoking interview with PrideSource, living legend Annie Lennox discussed in detail how she sees feminism in today’s world. While doing so she addressed what she called a “lite” brand of feminism when asked about Beyonce.

PS: As a longtime feminist, how do you feel about the way the term “feminist” has been reframed in contemporary culture?

Lennox: It’s a process. It continues to be reframed, and necessarily so, because people’s relationship to the word has been a bit ambivalent over the last few decades. According to who you speak to, they don’t sometimes quite know what to do with the word. I did one event in particular called (Barclays) Women of the Year and they select certain people for certain kinds of recognition, and I was given an award not so long ago. I was so touched to have this award. I felt like I’m with a certain kind of camaraderie here and we’re all together in this room – 400 women from all walks of life – and I said at the podium, “I’m proud to be a feminist; let’s everybody stand up.” Half of the room stayed seated. It was such a hard moment for me because I realized that some women, many women, still have issues with the word and almost distance themselves from it because they’re afraid it’s synonymous with hating men.

PS: Which is something you don’t believe to be true, right?

Lennox: Not at all. I think that what happened over the years, and quite rightly so, is that women had to be incredibly radical, stringent and strident about the voice of feminism. They had to do that, but I think that nowadays it’s a more subtle thing. But we need men to be on board with us. That’s my view.

PS: So what do you make of someone like Beyonce? She recently performed on the MTV Video Music Awards and proclaimed herself a “feminist” during her set.

I see a lot of it as them taking the word hostage and using it to promote themselves, but I don’t think they necessarily represent wholeheartedly the depths of feminism – no, I don’t. I think for many it’s very convenient and it looks great and it looks radical, but I have some issues with it. I have issues with it. Of course I do. I think it’s a cheap shot. I think what they do with it is cheap and … yeah. What can I tell you? Sex always sell. And there’s nothing wrong with sex selling, but it depends on your audience. If they’re 7-year-old kids, I have issues with it.

What do you think about Lennox’s take on the topic?