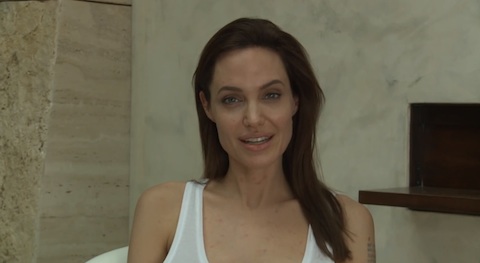 Angelina Jolie, whose directorial debut Unbroken is garnering major Oscar buzz and collecting charges of racism from Japanese nationalists, was forced to stay home from the film’s red carpet premiere this weekend. And, in fact, she had to pull out of all promotional activities. Cleared her schedule, truth be told.

Mrs. Jolie, it seems, has come down with a nasty case of the chicken pox. It’s so bad–and happened so unexpectedly–that Universal Pictures had her shoot a little video clip to explain (and prove) it.

That is all well and good, and best wishes for a speedy recovery to A-Jol. But the whole thing is kind of silly. First of all, if you watch the clip without hearing the audio, it looks like a ransom video shot in an underground bunker. She could very well be reassuring her loved ones that she’s still alive, and instructing them to leave a million dollars in unmarked, non-sequential bills in a duffel bag at the corner of State and Madison.

And secondly and (perhaps) more pertinently, this last-minute bout of chicken pox comes just after the hacker attack at Sony. Which revealed, among other things, that producer Scott Rudin thinks Jolie is a “minimally-talented spoiled brat.”

So, there’s been some speculation that Jolie bailed simply because she didn’t want to answer questions about that story, or to have it overshadow her film. This could be the beginning of some real shady doins in the motion picture industry.

Whatever the reason, we really do wish Angie J a quick recovery.