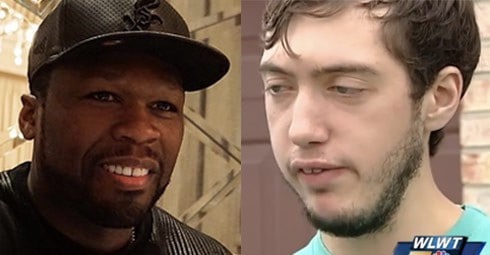 Rapper 50 Cent has issued a formal apology after he accosted a young man who was simply trying to do his job at the Cincinnati/Northern Kentucky International Airport.

Mr. Cent lacked any sense at all when he used his cellphone to record 19-year-old custodial worker Andrew Farrell pushing a cart full of cleaning supplies through an airport terminal. And 50 was certainly not at 100 when heaccused Farrell of being high in an expletive-laden rant that the star decided to post on Instagram.

Farrell was not high: he was doing his job, and didn’t acknowledge Mr. Cent in part because he lives with autism and Asperger’s syndrome and because he was obviously the way better human being in this scenario.

Fiddy got hammered for the clip, took it down, and has now issued a written apology:

While the incident at the airport resulted from an unfortunate misunderstanding, please accept my sincere apologies for offending you. It was certainly not my intent to insult you and I wish you and your family well.

Not sure about a misunderstanding when you put a phone in someone’s face, accuse him of being high, and then share it on the internets? Even if Farrell was just a stoner kid as 50 suspected (which he isn’t), at least he was doing his job and not bothering anyone else in the process.

As for the family of Farrell, they begrudgingly accepted the apology in a statement issued to WLWT:

We would first like to thank everyone for the amazing amount of support that they have shown over the past few days. It has been an emotional roller coaster that we are ready to put to rest. As requested, we have received a letter apologizing for 50 Cent’s behavior and we have chosen to accept it, along with a request that a donation be made to Autism Speaks. Though a letter of apology will not undo what 50 Cent has put our family through, we are choosing to forgive. A great lesson can be learned from this heartbreaking situation. Regardless of the way that another person appears to you, it is never OK to publicly humiliate them via social media. We hope that this situation brings more awareness to what people with autism and other forms of social anxiety suffer through on a daily basis. Again, we thank the growing number of supporters who have shown both love and acceptance during this difficult time.

May is Mental Health Awareness Month. If you want to learn more about this topic, we encourage you to check out the official site for the National Alliance on Mental Illness (NAMI).