It seems the night is fast approaching when SNL will have completely purged itself of funny. Amy Poehler will be giving birth any second, and upon returning from maternity leave, she will have her own show. Mike Schur and Greg Daniels (from NBC’s sitcom The Office, which is 98% purged of unfunny) are working on the as yet untitled sitcom.

E! talked with Schur about the new show, revealing that the show’s pilot should air in April, to be followed by a shortened season of six to eight episodes. The show will co-star Aziz Ansari, the only other cast member to be revealed. As far as a title for the show, Schur jokes that they are currently going with the working title of Amy Poehler, Beyond Thunderdome.

Though this is certainly a good thing for Poehler, as she hopes to follow in the high heeled steps of fellow SNLer Tina Fey and the success of her show 30 Rock, it is a dark day for those few Saturday Night Live fans still out there. Poehler was the lone bright spot left on a mediocre cast burdened by base and arid comedy writing. Instead of Amy’s charming goofy faces and more than adequate sarcastic delivery on Weekend Update, we are left with an hour and a half of “Fart face! Fart face! Fart face!” with only an occasional laugh-worthy moment when the show brings back Will Ferrel, Tina Fey, or Christopher Walken. (You know you have a bad comedy show when you have no one left that can perform a Sarah Palin rap and shoot a moose and make it funny) 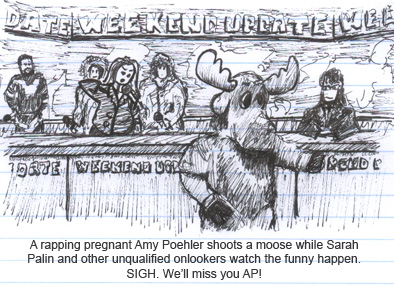 In this day and age of internet talent, wouldn’t it be possible for the show to open its doors to online writing submissions? Can you imagine how funny and creative the show would be when selecting from this kind of pool? And they wouldn’t have to pay very much, the honor and resume boost from having a skit performed on SNL would be compensation enough for most unknown freelance comedy writers. I realize there are all sorts of union issues any time you try to pay any “common folk” in Hollywood, but there just has to be a way around it! If they continue with the “single, weak idea drawn out over seven minutes” method, it is only a matter of time before someone puts together a similar show that’s better! (Perhaps I should say “way better,” I don’t want to inflate the egos of Mad TV fans)

But you don’t have to believe this humble reporter, not when you can ask science! Starcasm.net employs a team of comic scientists that have invented a device that can measure exactly how funny a television show is just by imputing the audio and video and adjusting a few settings. It is called a guffawmeter and it can quantify the effect of A-Pol leaving the show. (0=not funny  10=”More Cow Bell” funny ) 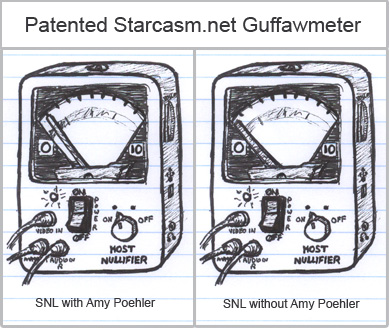 SNL has been a fantastic comedy factory over the decades and it is just too painful to watch this “factory” producing the comic equivalent of napkins.

****UPDATE! – Amy Poehler is officially a baby momma! (Well, maybe not technically, since she’s married to Will Arnett) TMZ is reporting that Poehler and Arnett had a little baby boy today and (obviously) Amy won’t be appearing on SNL tonight. Maya Rudolph WILL be appearing, though, and will portray Michelle Obama on the show. We assume it’s because Maya is SO talented at being female and not white. We powered up the guffawmeter and input Maya Rudolph into a Poehlerless cast and it came back zero, negative one if she sings.

Amy and Will – we want to help lessen your burdens as much as possible and offer these boy names as suggestions for the sonny of funny:

Amy Poehler talks about using hard drugs, getting divorced from Will Arnett