Alec Baldwin, one of Hollywood’s greatest authorities on parenting and marital litigation, is sharing his expertise with the rest of us in a new book titled “A Promise to Ourselves: A Journey Through Fatherhood and Divorce.” 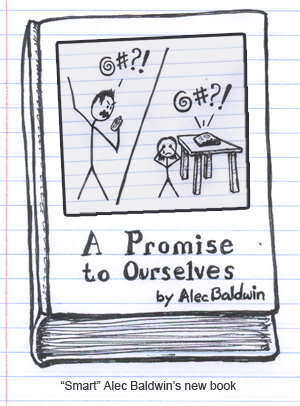 The book explains how a frustrating family court system can cause you to leave obscene, enraged messages on your 11-year-old daughter’s voicemail. It also explains that those obscene, enraged messages are between you and your daughter, and your !@?#?! of an ex-wife has no #!?@# business leaking them to the ??@#?$ press! (Our paraphrasing and creative use of cartoonish punctuation)

(This is all in reference to a message Baldwin left on his daughter Ireland’s voicemail when she did not answer a pre-arranged phone call from daddy. Baldwin berated the “rude, thoughtless little pig” with angered profanity and threats. The message was leaked to the website TMZ, and Baldwin’s legal team accused Basinger and her lawyer of leaking the recording. Through all of this, Ireland has remained the most mature member of the family.)

The book serves as a travel guide for all shallow and petty blowhards traversing the pitfalls of a broken marriage and promises to be just the first volume of thousands in which Alec Baldwin will help us learn from his mistakes.

Alec just won an Emmy for his performance as Jack Donaghy on the NBC sitcom “30 Rock.” Donaghy is arrogant, childish, egotistical, mysteriously successful and sometimes surprisingly insightful. It’s basically the same character Baldwin plays in all his movies and in real life, minus the surprisingly insightful moments. Unlike reality, the characteristics are very funny on the big screen and on television.