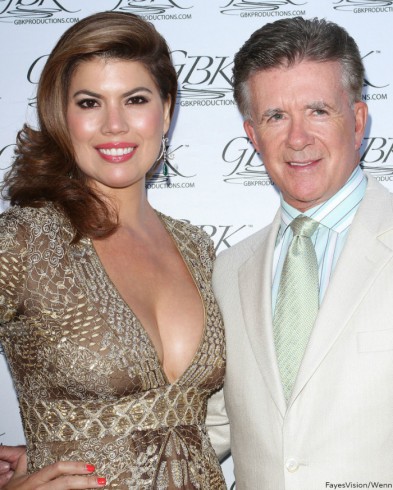 Canadian television icon Alan Thicke (whom devotees will recall is Unusually thicke) is perhaps best known to the current young, hip generation as the father of “Blurred Lines” troubadour Robin Thicke. The elder Thicke, 68, is married to reality television star Tanya Callau, 40, and has been for ten years.

Recently, Alan dropped a bit of a truth bomb on all our heads–the kind that reminds you that, no matter how old you get, your parents can always still embarrass you. In an interview with UsWeekly, Thicke revealed the following:

When we do get freaky, we love [Robin’s song] ‘Sex Therapy.’ You have to admit, it’s a great song to get in the mood.

Robin certainly seemed to be mortified–he tweeted out the following response shortly after the interview went live:

Dad, I heard what you said to @usweekly… I need you to give back all of my music. Immediately. @Alan_Thicke

If you ever wished you grew up to be a huge pop star, and were perhaps a bit sad that that dream didn’t come true, take heart: at least you know your parents aren’t doing it to the sweet, sweet sounds of your very own voice.

Robin Thicke and Paula Patton are better than ever, he says