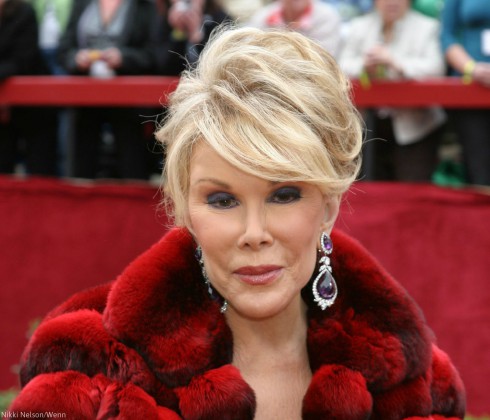 Although even the best and biggest actors miss out on awards shows every so often, Joan Rivers was a fixture on red carpets of all types for years. So, when she was left out of the Oscars’ In Memoriam segment, many — including her peers — cried foul.

Am I missing something or was @Joan_Rivers really left out of the #Oscars memorials?

.@Joan_Rivers a glaring omission from the in memoriam segment. #Oscars

“No Joan Rivers in the montage??? She basically created the red carpet which makes all of these b**ches millions,” comedian Billy Eichner twitted. “For shame!!!”

Here's the In Memoriam for Joan Rivers that should have been. pic.twitter.com/JbJGpXCgSK

Some others noted that Joan was way more than an expert red-carpet interviewer: She wrote and directed Rabbit Test in 1978 and acted in a number of films. However, the Academy is standing by its decision to omit her.

“Joan Rivers is among the many worthy artists and filmmakers we were unfortunately unable to feature in the In Memoriam segment of this year’s Oscar show,” they said in a statement today. “She is, however, included in our In Memoriam gallery on Oscar.com.”

Do you think the explanation is understandable? Or was Joan snubbed?