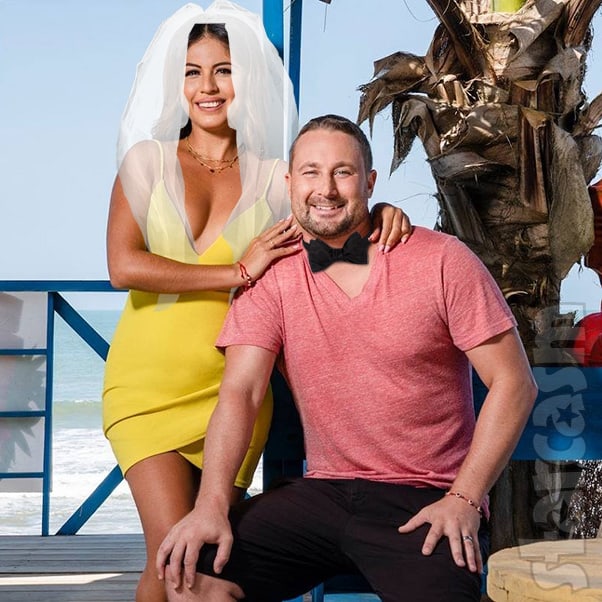 On the current season of 90 Day Fiance: The Other Way, Corey and Evelin’s story line centers around the couple planning for their wedding. On Sunday night’s episode, Evelin and her sisters visited a local dressmaker so that Evelin could try on a wedding dress. At the end of the scene, Evelin dropped a HUGE bombshell to her sisters and to viewers: she and Corey are already married!

The big reveal was actually the second bomb that Evelin dropped on Lesly and Lipsy. After trying on a wedding dress and asmitting that she was feeling incredibly anxious, Evelin began her marathon tea-spilling session.

“Well, now that I’ve had alcohol,” Evelin nervously jokes in the scene. “I told you that Corey was flirting with girls. But you don’t know that Corey had this girl in Peru and he was presenting her as his girlfriend.”

Evelin goes on to reveal that Corey told her he only knew Jenny from Peru for a week and the whole “girlfriend” thing was just a translation issue.

“I cannot believe that Evelin told us that Corey cheated on her and that even then she still wants to go on with the wedding,” Lesly says in a separate interview alongside her sister. “I mean, she is crazy.”

The scene returns to Evelin, Lipsy and Lesly in the dressmaker’s shop, and Evelin eventually drops the second bombshell. Here’s how the dialogue went:

LIPSY: There is your evidence that he is not as invested in the relationship as you think he is.

LESLY: If he does that to you while you are his girlfriend, he’s going to cheat on you when you’re his wife. It is so stupid that you want to marry him like this.

LIPSY: You’re not even comfortable trying on the dress. How are you going to feel the day of the wedding?

LESLY: You can’t marry him when you have those doubts.

LESLY: I don’t agree with this.

EVELIN: You don’t agree with me marrying?

EVELIN: You don’t either?

EVELIN: Well, now I have to tell you something.

LESLY: [Hides her face with her hand.]

EVELIN: The truth of the matter is, one year ago, Corey and I went to Guayaquil and got married.

I’m unsure when Corey and Evelin filmed for the current season of The Other Way. Plus, they frequently visit Guayaquil, so it is difficult to pin down any sort of window for when they tied the knot.

Since the reveal has been made on screen, perhaps Evelin and/or Corey will share a few more details (and maybe even photos) on social media. We will keep an eye out and update the post if they do.

UPDATE – Corey shared a photo with Evelin on Instagram and addressed the marriage reveal without providing additional details. “Its finally revealed that we did actually get married years ago…” Corey wrote in the caption. “Stay tuned because so many of the long awaited questions will be answered very soon! Are you guys ready?”

Did Corey and Evelin actually get married before TLC?

Ever since Corey and Evelin made their debut on 90 Day Fiance: The Other Way there have been rumors that the two of them were actually married well before they started filming with TLC. We covered the marriage rumor in a previous post that included several other things that people often use as reasons to dislike Corey and/or Evelin.

This is one complaint that can’t be blamed on producers or editing. As far as I can tell, this whole rumor started thanks to a blurry screen cap of someone stating that the two were married years ago, combined with an old photo of Corey wearing his promise ring. That’s it.

I thoroughly vetted this couple when I did my profile post on them, and there is absolutely no evidence that they were married years ago — or at all. I laid out the complete timeline of their relationship, which started when the couple first met back in 2014. Everything the couple has stated on screen and online lines up with what I was able to find out. Could they have secretly married and I missed it? Of course! BUT, I have seen ZERO actual evidence that they are married, and I have zero reason to suspect they are lying.

YouTuber and occasional 90 Day scoopologist Keith Brooks visited Evelin (and her The Other Way co-star Laura Jallali) in September and October of 2019, and he shared an update on the couple’s relationship status. “They’re not married,” Keith flatly stated. “So all that speculation that they were married years ago is not true. They are not married.”

Getting bak to the present… It seems odd that viewers are left with a “Evelin and Corey wedding planning drama” story line when they’re already married? Perhaps there are more bombshells to come? (Even though I’m not sure what those could be.) To find out, be sure to keep tuning in to new episodes of 90 Day Fiance: The Other Way airing Sunday nights at 8/7c on TLC! Or, stream new episodes (and the entire series!) on discovery+.