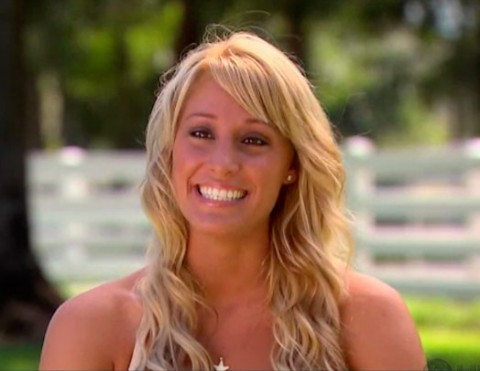 On tonight’s episode of The Bachelor Vienna Girardi revealed that she was engaged to her pastor’s son for four years and broke off the engagement when she was just 17 years old. Her ex then got married to someone else within a month. Vienna was torn up about it and ran off and eloped with a guy she claims she didn’t even know!

Well, we know him and his name is Joshua William Riley. He married Vienna, who changed her name to Vienna Riley, on September 6, 2005. The divorce was finalized on July 18, 2006. Both parties listed their residence as Florida, but there are online records that show a Jacksonville, North Carolina address for Vienna for a brief period of time. Much like her high school sweetheart, Joshua soon remarried to an Amanda Riley in North Carolina in April, 2007. So if Jake winds up choosing Vienna and it doesn’t work out, chances are he will be married to someone else within a year! She needs to tell him that before she gets booted!

UPDATE – Did Vienna have a boyfriend while on the show? CLICK HERE!

I’m trying to find out more info and I will post it here as soon as I find it! Until then, you can kill time by reading Vienna’s bio and checking out photos of her from various social networking sites (***SPOILER ALERT***) HERE. The link goes to a post containing a reference to Reality Steve’s article and reveals something that is supposed to happen after Episode Two*** (There’s even a picture from her high school yearbook!)

PHOTO The Bachelor’s Vienna Girardi topless calendar picture. Are more on the way?