Ke$ha’s feelin’ more like P.Diddy than P.Diddy is right now because you can’t do anything without hearing Ke$ha’s smash hit “Tik Tok.” Her messy hair and surly singing voice have invaded our lives so deeply we can’t help but sing about Ke$ha’s questionable lifestyle choices like brushing her teeth with liquor and picking up men who look like Mick Jagger while we do our laundry or grocery shopping.

So who is this Ke$ha? Why does she have a dollar sign in her name? Does she really brush with Jack Daniels?

Ke$ha, (born Kesha Rose Sebert March 1, 1987 in Los Angeles, CA) placed a dollar sign in her stage name as an ironic gesture that turned out to be prophetic. Her global smash hit “Tik Tok” officially became the first number one single of 2010 on the Billboard Hot 100. According to Nielsen, “Tik Tok” has achieved a staggering 2.44 million plus downloads. That did say million. When her album, Animal, dropped January 11 it debuted at #1 on Billboard’s Top 200, knocking Susan Boyle off her long-held top spot with I Dreamed a Dream.

At a young age she was pushing demos and looking to find a way into the music business. She moved to Los Angeles and like every other female under the age of 70 in the City of Angels she was barely making ends meet waiting tables and telemarketing (you might very well have hung up on Ke$ha during dinner one night!).

In her youthful ambition  she wanted Prince to produce her so badly she snuck into his Beverly Hills home and freaked out when she heard him rehearsing in another room. She called her mom, who told her to hand Prince the demo CD, which she managed to do before being unceremoniously escorted out. Prince ultimately didn’t decide to produce OR prosecute.

Her big break came with a collaboration with Flo Rida on the number one single “Right Round.” Flo needed a female singer and as fate would have it Ke$ha had the right gender and was Jenny on the spot when the track was being recorded. In the following video you will hear but unfortunately not see her (actually this was her decision, she wanted to be taken seriously as an artist in her own right).

On the heels of “Right Round” the dominoes began to fall. She signed with RCA, cowrote the title track for Miley Cyrus’ The Time of Our Lives EP and appeared on the cover of Women’s Wear Daily. 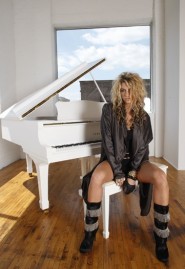 All of these steps led her to the addictive doorstep of “Tik Tok”:

“Before I leave, brush my teeth with a bottle of Jack
Cause when I leave for the night, I ain’t coming back”

And in case you’re wondering if she really does gargle with Jack Daniels, that’s a resounding YES. She recently told Entertainment Weekly that that fact was “absolutely true.” Actually, her whole album, Animal is based on what her life has been like over the past four years.

What do you think, is Ke$ha just a bright flash in the pan, or is her party just starting to pop?

CLICK HERE to see Ke$ha’s television debut pre-dollar sign in 2005 with Paris Hilton and Nicole Richie on The Simple Life.