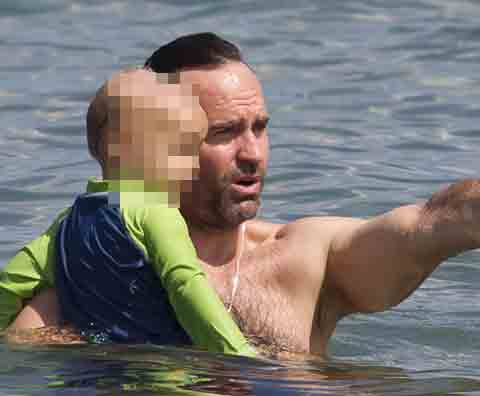 Actor Jason Patric’s paternal rights fight is a complicated case. This year he lost custody rights to a son he fathered with an ex-girlfriend, but here’s the twist: the child was conceived during a time when they were broken up with sperm Jason gave to his ex Danielle Schreiber with allegedly no intentions to a part of the child’s life. Danielle says he offered to give her sperm in lieu of giving her money. His name does not appear on his now three-year-old son Gus’ birth certificate.

But two years later, in 2011, Jason and Danielle rekindled their romance, and Jason spent a lot of time with Gus (above is a photo of Jason and Gus during a beach trip.) After they broke up again, Jason sought custody rights for Gus, but was denied by a judge to sue for those rights because of his sperm donor status. Under the current law a sperm donor is not considered the “natural father” of their offspring unless they sign a document beforehand.

Jason says that Danielle and her lawyers used a statue that protects sperm donors from owing child support, and women who have children via sperm donors from having strangers come into their child’s life against him. He says that he “gave” her his sperm instead of the natural babymaking way because Danielle needed IVF treatments to get pregnant. He says that he did sign a statement of intent to be Gus’ father, and that prior to all this he underwent a surgery to help make it his sperm more viable.

Jason is now advocating for a new California bill called, SB 115, which passed the state senate, that allows a sperm donor to sue for parental rights of a child if he can prove he “receives the child into his home and openly holds out the child as his natural child.” So, technically, the bill does not leave the door open for every guy who donates at a sperm bank to them seek out one of his children and try to get rights to them. It does leave open the possibility of rights for men who donate their sperm to a couple who cannot conceive otherwise who may be a friend. If the child ends up spending significant time with the biological father, and views him as a father, this bill allows the man the right to sue for custody of that child.

Opponents of the bill say that the requirements under this bill may be too low, and that regardless of the outcome, the law can severely disrupt a family’s life by allowing the biological father to bring this to court.

California’s chapter of NOW (National Organization for Women) strongly opposes the bill. “The desire for the known sperm donor to have the additional rights of custody and joint decision making without the consent of the mother is nothing but dominance personified,” NOW’s Patricia Bellasalma, said. “It is not lost on California NOW that SB 115 does not seek the same ownership or control of children for egg donors and/or surrogates.”

In an interview with Katie Couric on her show today, Jason denies that he “donated” his sperm. “I didn’t donate my sperm,” he tells Katie. “I gave my sperm to have a child with Danielle. I thought many times ‘Would I have done this differently?’ I would have protected myself, but I still would have a child with this woman because Gus came out of it. And the only way Gus, that little miracle that he is, would have been through me and her, so I would go through all of it again.”

Danielle issued this statement to the Katie show:

My top priority as a mom is the welfare of my three year-old son. I thought the law would protect my ability to do what is best for him. When Jason offered me his sperm, it was under the condition that his donation never be made public and that he would not be a father to the child. I chose to use a known donor over a stranger, but only after I knew the law would protect my ability to make the best decisions for my son.

I allowed Jason to have contact with my son while we were dating, and even then he insisted that I keep his donation a secret and uphold our original agreement. I never would have allowed this contact if I thought it would put my rights as a mom and the stability of my son’s future at risk. For me, this has never been about preventing contact, this is about preserving parental rights.

Now after relying on a 26-year law, I am in the middle of an ongoing legal battle and having to defend against Jason using a connection with the state legislature to overturn a court case that he lost. I just hope and trust that the legislature will protect my family and the countless other families like mine by not interfering with the rights that we were promised.