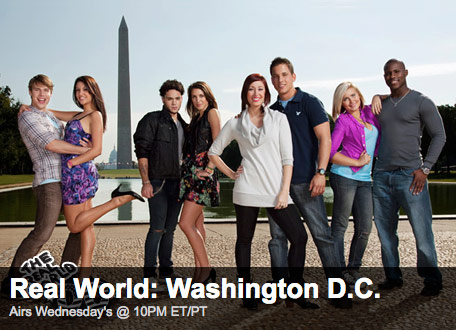 In case you missed the Wednesday night premiere of the 23rd season of MTV’s The Real World taking place in Washington, D.C. here is the full episode watchable online!

So, do you have a favorite cast member yet?!? Do you have a thing for panda helmets? Do you REALLY like chicks who REALLY like Obama? Let your voice be heard in The Real World Washington D.C. cast favorite poll! It should be fun to watch how this shifts over the course of the season as those seemingly charming individuals that were so cute in the beginning turn out to be real jerks and the seemingly selfish a-holes reveal that they have a heart. (More times than not it’s the former and not the latter.)

You can vote for up to three! Oh, and you can vote again after 24 hours.

Be sure to check out our post with all sorts of pictures of Ashley Lindley from her myspace and twitter accounts!