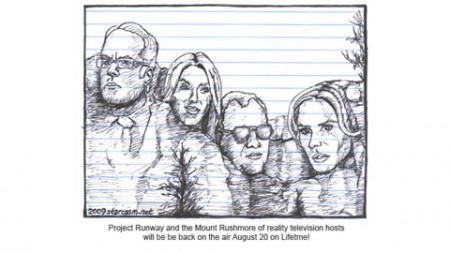 It’s official! Lifetime has announced a date for the season six premiere of their newly acquired reality show Project Runway and they’ve launched the new PR website with photos, bios and videos of the new contestants! The critically acclaimed fashion reality show formerly on Bravo will air August 20th at 10 p.m. EST and will be followed by Lifetime’s new PR companion show from the model’s perspective, Models of the Runway.

The entire Mount Rushmore of reality show hosting will be back, including Heidi Klum, Tim Gunn, Michael Kors and Nina Garcia, but another star from the previous five seasons will not be there: New York City. Producers of the show packed up the lights, cameras and sewing kits and moved the entire production from The Big Apple to the City of Angels, Los Angeles.

Filming of season six was completed some time ago and a winner was declared after a return to New York for the usual Fashion Week finale, but because of a legal battle with its former network Bravo, airing of the show has been delayed. Thankfully, producers have managed to keep all the deets under wraps and avoid spoiler leakage, though Tim Gunn did offer a teaser when he told the Miami Herald that the new season includes “a big-time shocker, some purported cheating…The blogs will be clogged.” I’m gonna be clogged! I can’t wait! I’m gonna start feeding my blog some laxatives now! (Project Runsway?) Here’s a fun commercial from Lifetime:

Also, Lifetime has released info on the 16 contestants that will be stitchin’ and b*tchin’ their way to pop culture notoriety, with an age range of 24 to 50 and designers from as far away as the former Soviet Union! Oh Glasnost you di-unt! Here they are:

(Nicolas, Gordana and Irina are originally from Russia, Bosnia and the Republic of Georgia)

“I am a huge fan of Project Runway and could not be happier that Season Six will be premiering on Lifetime, the #1 network for women,” said Andrea Wong, President and CEO, Lifetime Networks. “The talent in this all-new season is nothing short of amazing, and I can’t wait for all of the fans to see the incredible work of these brilliant designers.”

Models of the Runway, an exciting new companion series, will air at 11:00PM ET/PT, beginning August 20, immediately following Project Runway. Each 30-minute episode will give fans a behind-the-scenes look at the reality competition – from the models’ perspective. Viewers can experience the drama, anxiety, joys, tears and frustrations as the models themselves face elimination each week and compete for a cash prize and photo spread in Marie Claire magazine.

ABOUT PROJECT RUNWAY
Hosted by supermodel and fashion maven Heidi Klum, the hit series provides budding designers with an opportunity to launch their careers in fashion, under the watchful eye of mentor and Liz Claiborne Chief Creative Officer Tim Gunn. The wildly successful competition reality series has proven to be one of television’s most talked about shows and was the highest rated reality competition on all of cable for 2008.

ABOUT BUNIM-MURRAY PRODUCTIONS
Bunim-Murray Productions is the leading independent producer of innovative entertainment content. The company is widely credited with creating the reality television genre with its hit series The Real World. Bunim-Murray’s current programming includes the hit series Keeping Up with the Kardasians. Launched in 2006 to better reach the Digital Generation, Bunim-Murray’s M Theory Entertainment is a spin-off entity focusing on new media initiatives. Bunim-Murray also recently launched BMP Films, a documentary film division, which premiered its first documentary, Autism: The Musical, at the 2007 Tribeca Film Festival. Bunim-Murray Productions is based in Van Nuys, CA. It was founded in 1987 by Jonathan Murray and the late Mary-Ellis Bunim.

ABOUT THE WEINSTEIN COMPANY
The Weinstein Company (TWC) was created by Bob and Harvey Weinstein, the brothers who founded Miramax Films Corporation in 1979. TWC is a multi-media company that officially launched on October 1, 2005. Dimension Films, the genre label that was founded in 1993 by Bob Weinstein, is also included under the TWC banner. During the Weinsteins’ tenure at Miramax Films, the company released some of the most critically acclaimed and commercially successful independent feature films which received 249 Academy Award® nominations and won 60 Oscars®, and have generated billions of dollars in worldwide box office receipts and billions more in home video sales. In its history, Dimension Films has released some of the most successful franchises including Scream, Spy Kids and Scary Movie.

ABOUT LIFETIME TELEVISION
Lifetime is a diverse, multi-media company, committed to offering the highest quality entertainment and information programming, and advocating a wide range of issues affecting women and their families. Lifetime Television, Lifetime Movie Network, Lifetime Real Women and Lifetime Digital (including myLifetime.com) are part of Lifetime Entertainment Services, a 50/50 joint venture of Hearst Corporation and The Walt Disney Company.

LINKS Hot mug shot guy is free, Another Baldwin on the way, plastic surgery is the new makeup…