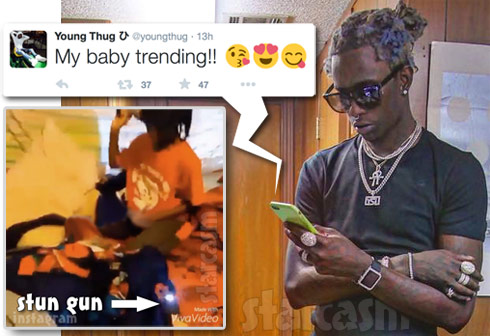 The mothers of rapper Young Thug’s children are no stranger to parenting fail videos, and the latest features one of them using a stun gun to threaten her young son when he is reluctant to prepare for a game because his cartoon is on.

The video was later deleted, but not before @fameolous_ downloaded it, put his name on it, and re-uploaded it:

DM Tip: Young thugs ratchet a** Baby mother thinking its cute to play with his son with a stun gun. Editorials note- The mother claim the little boy was taking too long to get dress so she pulled out the stun gun. Joke or Too far?

You can hear the “ZAP!” of the stun gun as a woman laughs and says, “Hurry up! You gotta be out there in the field!” The mom reportedly captioned the video with: “He wants to take his time to get ready for his game because his cartoon is on.”

Here is a screen cap in which you can see the stun gun sparking in the lower right hand corner: 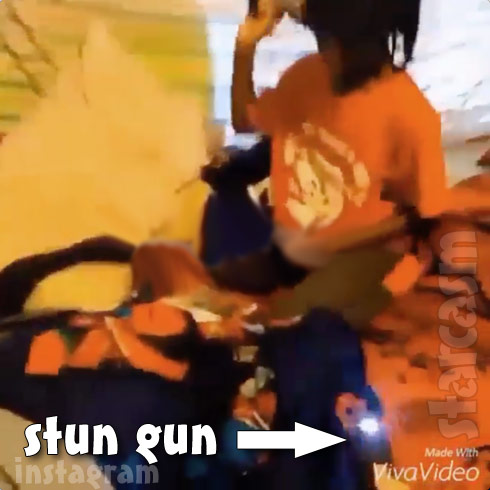 According to @fameolous_, “a tip was sent to Division of Family and Children Services, and police immediately launched an investigation.” Apparently Young Thug doesn’t seem too concerned. He’s actually a proud pop because his child is trending?!

I guess there is no such thing as bad trending?

The controversial clip comes just a few weeks after a video of Young Thug’s even younger daughter went viral. In the clip, the little girl is made to repeat that she is “motherf***ing tired” over and over.

Is the entire top row of her teeth capped in gold? If so, that girl better get some Farrah Abraham-level coinage from the Tooth Fairy when those fall out!