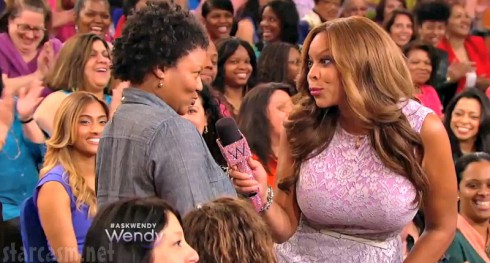 Talk show host Wendy Williams advised her lady friends to get what they want — even if that means going behind their husbands’ backs to stop birth control and get knocked up.

Wendy dished out the questionable suggestion during the “Ask Wendy” segment of her talk show earlier this week when an audience member presented this situation: Before getting married, her husband agreed to having two children. They welcomed their first child nine months ago and now momma’s ready for another… But, the husband changed his mind and wants to close up the baby shop. The woman’s friends proposed going off birth control without telling her hubby so that, when she conceived, she could claim it was a “whoopsababy.” What did Wendy think?

“I don’t like spousal lying… However, men have never been in control of our bodies. We’re the ones in control. I’m not going to suggest you do that, but look into my eyes,” Wendy said, suggesting she do that. “HE PROMISED!”

After giving her response, Wendy asked the audience to applaud if they agreed — and many people did clap their hands. But, not surprisingly, the public reaction hasn’t been so positive since the video was posted. The clip has more than 1,600 down-votes on YouTube (in contrast to just 381 up-votes).

People are also weighing in with their own suggestions for the woman. One made the good point on Wendy’s Facebook page that, sure, it’s ok to stop taking the pill and get pregnant… Just “don’t be surprised when ya’ll fighting all the time, he starts cheating on you and is no longer spending time with his kids because you were selfish and set him up.”