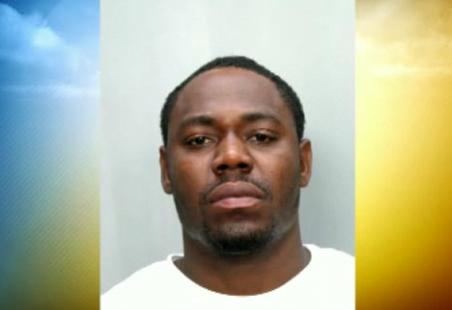 The Miami-Dade Police Department has released an extremely violent and shocking video of an assault that occurred on June 11th outside of the Coco Lounge strip club in Miami, Florida.  In the video five men attacked 25-year-old Getro Dolicine and beat him so savagely that he wound up in critical condition at Miami’s Jackson Memorial Hospital.

Dolicine and the five assailants got into a verbal argument inside the club and were escorted out by security.  The video surveillance from outside the club shows Dolicine being sucker punched, followed by having a barricade thrown against his defenseless body and then being punched in the head.  This is followed by yet another barricade attack on his motionless body.

Here is the clip. As I mentioned, these images are EXTREMELY VIOLENT and should only be watched under adult supervision:

Alexis Mackendly, the man pictured above, was arrested and charged with first degree attempted murder for his involvement in the attack.  The other four men are still at large.  Mackendly has a tattoo that reads “Hood Fellas” on his fists.  The wanted men fled in a white 4-door BMW.  Miami-Dade Police are hoping that this video will help citizens identify the guilty parties.  If you have any information that may help the investigation you are encouraged to call CrimeStoppers at 305-471-TIPS.

Dolcine has since been released from the hospital.