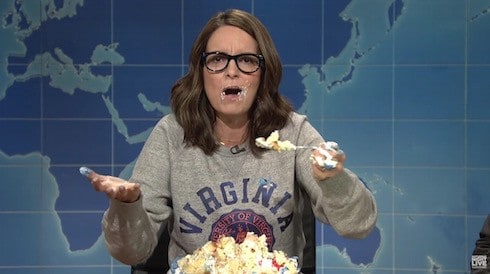 Saturday Night Live and University of Virginia alum Tina Fey closed out the latest episode of SNL’s Weekend Update summer edition with a jaw-loosening pro-cake, anti-Nazi speech that you really need to both hear (for its many tasty takedowns) and see (for the one-sided food fight) to appreciate.

A quick summary before we get out of the way and let the video speak for itself: Feeling outraged and anxious by the seeming rise of American white supremacy in the wake of the Charlottesville terror attack–and sickened by Donald Trump’s response? Channel all of your emotion into consuming an entire sheetcake all by your lonesome, and leave neo-Nazis twisting in the wind when no one shows up to watch their little parade. Calling Paul Ryan a “pussy” and Ann Coulter a “yard sale Barbie” and pointing out a few of the bigger flaws in Trump’s pro-Confederate logic are optional.

For good measure, the glory of posterity, and our own personal gratification, here’s the full transcript of Tina Fey’s sheetcaking protest, starting from the 55-second mark in the clip above:

TINA FEY: Thank you Colin, and, Che: I just want to say that I always come out on Colin’s side because it’s the better half of my face–but I feel like this week it’s important to be clear about that.

TINA: Yes, Colin. It’s a beautiful school, and I have nothing but fond memories of my time there. And–I graduated a virgin, and I still liked it. That’s how good the architecture is down there. So it broke my heart to see these evil forces descend upon Charlottesville. And then our president, Donald John Trump–which, I don’t think people talk enough about what a stupid, jackass name that is. It does *not* flow–Donald John? Whatever, he gets away with it ’cause he’s gorgeous.

Anyway, Donnie John comes out, and he says that he condemns violence on many sides. On many sides, Colin. And I’m feeling sick. ‘Cause, you know. I’ve seen Raiders of the Lost Ark, and, uh, I wasn’t confused by it. No, Colin, Nazis are always bad–I don’t care what you say.

TINA: Then, we hear that there’s nine more alt-right rallies planned around the country this Saturday, including one in Washington Square Park. And part of me hopes these neo-Nazis do try it in New York City? Like, I hope they try it and get the ham salad kicked out of them by a bunch of drag queens? ‘Cause, ’cause you know what a drag queen still is? A six-foor-four black man.

But, at the same time, I don’t want any more good people to get hurt. And I know a lot of us are feeling anxious, and we’re asking ourselves, like, ‘What can I do? I’m just one person–what can I do?’ And so, I would urge people this Saturday, instead of participating in the screaming matches and potential violence, find a local business you support. Maybe, a Jewish-run bakery, or, an-African-American run…bakery. Order a cake with the American flag on it–like this one–and, um…just eat it, Colin.

COLIN: Wait–I’m sorry; how is that supposed to help?

TINA: And then, next time, when you see a bunch of white boys, boys in polo shirts screaming about taking our country back, and you want to scream, ‘It’s not our country–we stole it. We stole it from the Native Americans. And when they have a peaceful protest at Standing Rock, we shoot at them with rubber bullets. But we let you chinless turds march through the streets with semi-automatic weapons.’ When you want to yell that, don’t yell it at the Klan, Colin. Yell it into the cake. (Screams into cake) Then, when Ann Coulter crawls out of her roach motel, and says, ‘Uh, antifa attacked Republicans in Berkeley,’ and you’re like, ‘OK, yard sale Barbie, but the other side is Nazis and Klansmen. And also, who drove the car into the crowd? Hillary’s e-mails?’

COLIN: Well, you know, they’ve already canceled some of these new rallies.

TINA: You see? It’s working already. Sheetcaking is a grassroots movement, Colin. Most of the women I know have been doing it once a week since the election. And don’t worry, guys–by the way–don’t worry. Some of the people in Charlottesville weren’t Klansmen–they were independent militias! Yeah! Did you know there’s over 250 well-armed militias across the US that are ready to mobilize at any time? Yeah! Guess what, Che–they’re not cops. No! They’re not cops, Che–they’re just militias and they train themselves.

CHE: Gimme some of that damn cake. (Reaches across the desk, grabs huge handful of cake, starts eating it)

TINA: (Slaps more cake down on the desk for Che) And you know what I say? I say, oh, you know, where’s Paul Ryan in all this? Right? You’re supposed to be like the cool, young Congressman in all this, but you don’t know how to @ somebody on Twitter? ‘Racism is bad @realDonaldJTrump, you pussy.’ Then, then Donnie Johnny says we need to defend our country’s ‘beautiful Confederate monuments’ when you know he would take ’em down in a second if he thought he could build a bunch of poorly constructed condos on the spot. Google ‘Trump Bonwit Teller,’ okay? And then your family says, ‘Oh, mom, you need to calm down,’ and then you start to feel powerless–and that is when you need to dip a grilled cheese into the cake. (Does so)

COLIN: And…and are you gonna stay until, like, the whole cake is gone, or…?

TINA: In conclusion. I really want to say–to encourage all good, sane Americans to treat these rallies this weekend like the opening of a thoughtful movie with two female leads: Don’t show up. Let these morons scream into the empty air. I love you Charlottesville, and, as Thomas Jefferson once said, ‘Who’s that hot light-skinned girl over by the butter churn?’

VIDEO Dennis Quaid freaks out on set: Is it real or a prank?