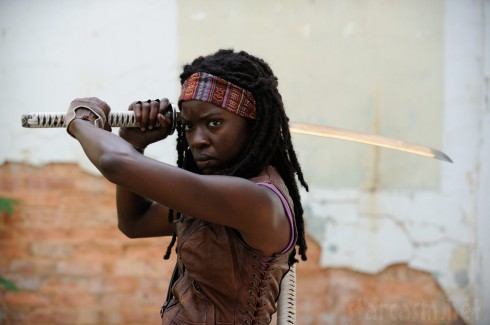 AMC capped off a weekend-long zombiefest that included every episode of The Walking Dead Seasons 1 and 2 and ended with a special episode of Talking Dead, during which the network premiered a Season 3 preview clip featuring the badass samurai-sword-wielding, zombie-killing babe, Michonne!

In the scene, Michonne (played by Danai Gurira) makes quick work of some zombie shoppers at a local drug store – all for a couple packs of aspirin. (More like kick asspirin! Dayum!) 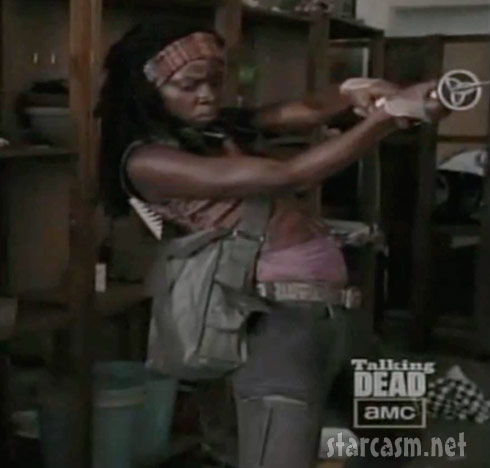 Michonne is one of the most eagerly anticipated characters in The Walking Dead Season 3, and will even be featured as part of AMC’s promotion of show at 2012 Comic-Con in San Diego. During tonight’s episode of Talking Dead, Co-Executive Producer Greg Nicotero was asked about what fans could expect at Comic-Con and he responded by stating, “For Season 3 we’re sticking with the iconic theme or recreating a great moment from the show, and what we’ve done is we’re going to recreate Michonne with her pets, but there will only be one pet, and visitors to the AMC booth will actually be able to walk up and put the collar and chain around their neck and be the second pet.” 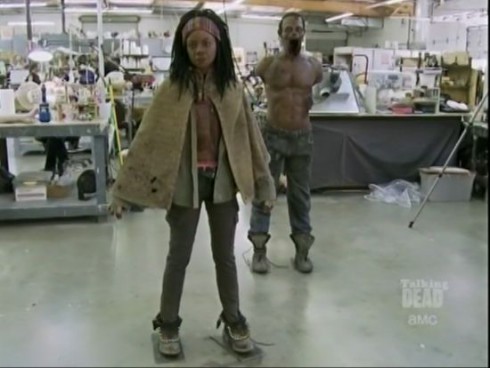 And just in case being a zombie slave of Michonne doesn’t appeal to you, Comic-Con attendees with an extra $70 can also opt to participate in Petco Field’s “The Walking Dead Escape” in which ticket holders can “live the apocalypse” themselves as they navigate through a zombie-infested course in hopes of making it through uninfected.

“We wanted fans to experience — as closely as possible — the end of the world,” said Walking Dead creator Robert Kirkman, who will join the mad scramble of biters and runners. “It’s going to be a fun, messy time.”

The course, designed by Ruckus Athletics and creatively guided by Kirkman, is characterized by intricate, interactive details true to the bestselling comic series, which will be celebrating the release of its 100th issue. It’s a go-at-your-own-pace event, Kirkman said; no one will be timed.

Fans can register as a survivor or a Walker [UPDATE – Walkers tickets are all sold out] — there’s also the one-time neutral option of taking it all in as a spectator [$15], which doesn’t seem to happen very often in the comic book or on the tie-in television hit, AMC’s The Walking Dead.

Survivors, dodging hordes of zombies, will be evaluated at the finish line, or “decontamination zone,” to see if they’ve been infected. Fifteen makeup artists will be on site to make the Walkers as grotesque as possible. Spectators can snap photos from the sidelines. Participants will be sent in waves through the ballpark. How will it work? The answers are on the event’s FAQ list.

Here’s a map – just click to see a zoomed-in version at TheWalkingDeadEscape.com! 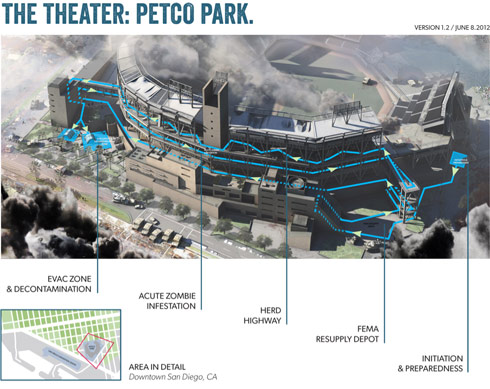 Here’s a backup video in case the one above gets decapitated by Youtube: