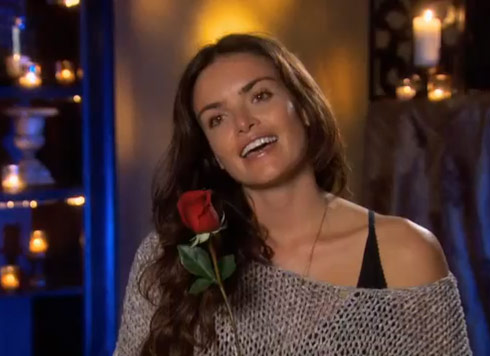 If you’re one of the millions of people tuning in every Monday night to watch winemaker Ben Flajnik look for love on ABC’s The Bachelor, then you are probably one of the millions who want to blow a hole in their TVs with a shotgun every time model Courtney Robertson starts one of her snooty rants about all the ways she is edgier, awesomer, and less prude than the other ladies in the house.

Seeing Ben fall for this bitchy (but beautiful) brunette bachelorette braggadocio has fans of the show in an uproar and makes for a legitimate argument to make testosterone something only available by prescription – and then, only in moderation. The mere thought of watching a video clip of her probably causes an instant aversion in you that may make you want to click “back” on your browser right now, but I want to assure you that there is a video clip of Courtney Robertson that will make you laugh, and this is it!

Watch as Courtney Robertson joins Ben Flajnik in an autotuned music number titled “I Got The Rose” featuring lowlights from Season 16 of The Bachelor!

Oh the magic of the internet! (I love Ben Flajnik’s backing vocals, “Did I mention she’s a modelllll? She likes to go toplesssss!”) Now if we could just get someone to be so merciful as to run autotune on all of Kasey Kahl’s unfortunate odes.

Britney Spears’ new music video “Hold it Against Me” is a comment on fame, commercialization

Viral video: Guy recovering from surgery shocked to find out the most beautiful woman he’s ever seen is his wife (is it a hoax?)