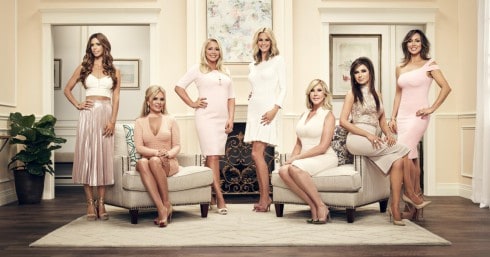 ICYMI, Bravo released the trailer for the new season of the Real Housewives of Orange County earlier this month. As we previously reported, Fancy Pants Heather Dubrow won’t be returning and has been replaced by two new-ish Housewives.

The first is returning cast member Lydia McLaughlin who first appeared on season 8 but exited the series after just one season following the birth of her third son. Also joining this season is Peggy Sulahian, Bravo’s 100th Housewife! Her husband owns a high-end designer wheel and rim company, and their lifestyle is nothing short of extravagant.

It was rumored Gretchen Rossi would be making a comeback as a full-time Housewife, but it looks as though she’s settling for “Friend” status this season. She appears briefly in the trailer stirring the pot when she questions Tamra about Eddie’s sexual preferences.

In addition to the trailer, Bravo released a teaser clip of Lydia and Shannon’s first introduction which was a hot mess dis-as-ter. (It’s in the video below.)

The ladies from the Real Housewives of Dallas are also returning for their sophomore season this summer, and the first preview clip has just been released. However, word on the street says the franchise is in jeopardy of being cancelled for not delivering enough drama.

According to The Real Mr. Housewife, “As of right now, this will almost guaranteed be the last season of RHOD. There is NOTHING happening on the show,” an insider close to production explained.

“The women are refusing to get into any confrontations and there has been no drama,” the source said. “Even the women who have issues with one another are refusing to confront them head on, as they are scared to look like a bad person or villain. If the women don’t start stepping it up, they basically are sealing the fate of the show.”

Check out Reza and Mike from the Shahs of Sunset as they introduce both preview clips from the RHOC and the RHOD.

Don’t miss the season premiere of the Real Housewives of Orange County when it returns July 10th at 9/8c on Bravo.