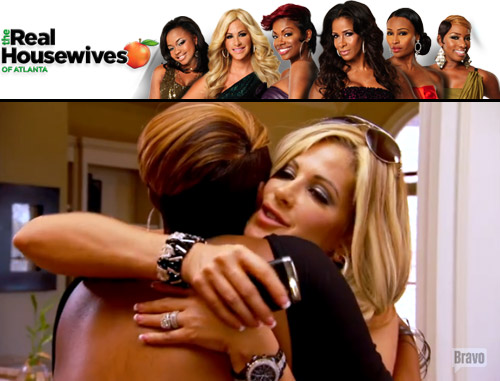 America’s favorite bushel of petulant peaches returned to Bravo last night as The Real Housewives of Atlanta kicked off their third season with multiple bangs!

I have to confess that I’ve had a hard time watching the DC ladies of late and I thought maybe the fact that Bravo has so many Housewives shows that the whole concept was just getting old, but all it took was ten minutes of Jawja drama to know that wasn’t the case! Before I bullet point some of the highlights from the first episode, here it is in its entirety:

• Sheree is putting her fashion career on hold to pursue acting. (I admit it, for about 5 seconds I thought Sheree was dating an older white man! I though tI had completely failed as a RHOA blogger because I had no idea.) (Oh, and not because Sheree is a great actress!)

• NeNe and Sheree have a laugh over Kim Zolciak’s article in Life & Style in which she admits to being bisexual. NeNe’s dramatic reading of the article reveals who should actually be pursuing an acting career!

• NeNe and Kim have once again buried the hatchet and after a bit of initial awkwardness the two are sharing drinks and once again become the most entertaining duo in all of Real Housewifedom! Their conversation alone had more entertaining moments than the entire season of The Real Housewives of DC! (Is there anything more trashy and fun than NeNe and Kim talking about Kim’s bisexuality? My favorite line was Kim addressing camera by saying, “I’ve been chasing d!cks since I came out of the womb.”)

• NeNe reveals to Kim that her and Gregg’s relationship has been strained since the recession impacted his real estate business in a severely negative way which changed the dynamic of their relationship by making NeNe the bread-winner.

• Kim reveals to NeNe that Dwight told her Gregg asked him to borrow $10,000. NeNe’s response? Astonished disgust and disparaging remarks about Dwight’s physical appearance! She claimed that if Dwight had $10,000 lying around he would have spent it on a much-needed nose job!

• Kim and Kandi Burruss talk about Kandi’s new beau, Baltimore Ravens running back Willis McGahee, and the death of her fiance A.J. Jewell last year. Kim reveals that her and NeNe’s on-again, off-again, on-again, off-again relationship is back on and Kandi says she wouldn’t be so quick to get chummy with someone who just choked her violently. Kandi also asks Kim about the Life & Style article and reveals that Kim had talked with her about swimming in the lady pond prior to the article coming out. Kim doesn’t seem to want to talk about it anymore and Kandi doesn’t press the issue, laughing it off.

• Kandi and Willis go on a rock-climbing date in which Willis seems a little too camera-friendly. (Anyone else a little suspicious of Willis flying down to Atlanta to date Kandi? The new big thing in professional sports is to get on a reality show, and what better way than to date a real housewife?)

• We were blessed with a glimpse into the parenting skills of Kim Zolciak who talks with her 13-year-old daughter Brielle about a French boy she’s interested in that doesn’t speak English and looks like Fabio. We’re treated to Brielle’s open-mouthed chewing of numerous food items before Kim tells the camera, “I hope I instilled the same morals and values that my parents did in me.” If that’s the case then the French boy must have a girlfriend but is willing to buy Brielle jewelry if she’ll date him as well. Can you say, “Petite Poppa?”

• Attorney Phaedra Parks made a GRAND entrance by declaring herself a “Southern Lady” with a Greek name that means “The Glowing One” before casting disparaging remarks at NeNe’s unladylike behavior, although both of them are from the same town of Athens, Georgia. Phaedra did a lot of name-dropping and seemed to ooze self-confidence, but not necessarily in a good way. Then it is revealed she is good pals with Dwight, who tells her he spent $30,000 on Sheree’s fashion show last year! It’s obvious Phaedra and NeNe are on a crash course! I can’t wait! Watching NeNe’s and Kandi’s feud last year wasn’t all that entertaining because Kandi didn’t really seem to do anything to deserve it. That isn’t the case with Phaedra. (Not to mention that her husband Apollo is an ex-con.)

• Kim gives Kandi a little lesson in parenting when Kim other, younger daughter wants to go swimming in the pool. Kim says no and points out the pool isn’t clean, but her daughter continues to beg, at which point Kim asks her, “Do you want an infection in your vuh-jay-jay? Cuz that’s what happens when you go swimming in a pool that’s not clean.” Kim threatens to count to 3 and makes it all the way to two numerous times. Kandi’s response to all of this? “I don’t play that.”

• Next up is a scene with Sheree and her hair stylist Lawrence, a true flaming queen willing to go the distance by wearing high-heeled shoes on a regular basis. Sheree tells Lawrence that Dwight has been telling people he spent $30,000 on the She By Sheree fashion show to which Sheree responds, “Dwight didn’t put a dollar into She By Sheree.” Lawrence responds by calling Dwight an “old stunt queen,” which means he “pulls stunts to make a living.”

• Kim and NeNE take a loooooong ride to the shoe show at the B Chic Boutique in an SUV and talk about life. NeNe reveals she wants her “happy” back. (Is drinking alcohol legal in the back seat of an SUV? I suppose it could have technically been a limo of some sort, but it wasn’t stretched and didn’t seem to be equipped for drinking.) She talks about Gregg and says, “If I could only tell you everything that has happened,” foreshadowing things to come in her rocky marriage. Then the conversation turns to Dwight and a tipsy NeNe writes him a check for the $500 Gregg said Dwight invested in a deal gone bad.

• All of the ladies (minus Cynthia) converge at the B Chic Boutique, including Dwight, and the fireworks begin to fly as NeNe confronts Dwight. Of course things get really ugly as NeNe starts screaming and trying to shove a $500 check in Dwight’s face. (AWESOME!) NeNe also throws a bit of shade on Phaedra saying she was a “Plain Jane” and didn’t possess the fabulosity of NeNe.

• NeNe and the ladies (minus Phaedra) leave the party early and NeNe talks with Kim on the ride home expressing regret at having let Dwight get her riled up like he did. “I am upset at myself that I didn’t stay calm enough to get answers,” she says. “I need to calm down and quit getting upset about crazy stuff.” (Booooooooooo!!!) She then thanked Kim for “having her back” along with Sheree, which bodes really well for the rest of the season because Kim and NeNe are the greatest dramatic duo on television when they are on the same team!

Sadly, newcomer Cynthia Bailey was completely left out of the premiere episode, but she was featured heavily in the previews for the rest of the season so hopefully we will be seeing that tall drink of sexy yum sooner rather than later! (Until we do, you can catch up on all things Cynthia Bailey in my profile post that includes photos, video, links, bio and even a radio interview on how to become a model!)

Tune in next week for more Southern drama from the beetchy peaches of The ATL!