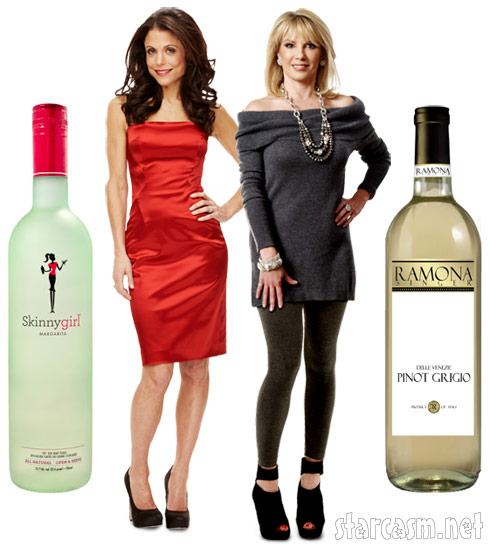 On tonight’s episode of Bethenny Ever After the reality star turned business mogul Bethenny Frankel sells her Skinny Girl cocktail line to the spirits company who owns Jim Beam, a sale that was rumored to have a price tag in the neighborhood of $120 million dollars. The figure has raised eyebrows and even altered how networks are structuring the contracts of their reality stars.

But, speaking of reality stars and raised eyebrows, Bethenny’s former Real Housewives of New York City‘s Ramona Singer – herself a business woman with a line of alcoholic beverages in the form of Ramona Singer Pinot Grigio – talked with PopEater’s Rob Shuter on his HDNet show Naughty But Nice With Rob and she says the number is a bit inflated.

“I was thinking before that figure came out she got about $30 million total,” Ramona tells Rob. “And divided that between her and her partners David, and usually they do a pay out, they don’t give you the money up front, they pay you out over time.”

And don’tthink for a second that Ramona’s comments were ignored by Miss Frankel! Bethenny sounded off on the Watch What Happens Live after show last night. Here’s the question posed to Bethenny from a fan on Twitter: “What are your thoughts on Ramona saying you exaggerated the amount you sold Skinny Girl cocktails for?” (It happens right around the 3:20 mark in the clip)

Bethenny: Ramona was probably intoxicated at the time, and there’s been sort of a string of negative comments from Ramona coming my way in the past year.

Andy: Is that right?

Bethenny: Yeah. Whether it’s “The show’s gonna be better without her” or “It was too dark with her.” There was always like a little snide kind of dig. Ramona cannot help herself, she really just has to kind of say the negative dig. So…

Andy:That being said, she really stood by you during your last season

Bethenny:That’s because it was a television show and she wanted to curry favor with viewers.

So where did the $120 million number come from? Many attribute it to an extensive article/interview from HollywoodReporter.com. Here’s an excerpt:

Any other day, her animated tangent about frugality might have seemed unremarkable, but this week Frankel was celebrating the acquisition of her Skinnygirl cocktail line (featuring a 100-calorie margarita) by the world’s fourth-largest spirits company, Fortune Brands’ Beam Global — which distributes the likes of Jim Beam bourbon and Sauza tequila — for a price tag insiders have placed at $120 million. It’s a feat never before seen in the spirits marketplace by a single celebrity (typically, the transactions are pure endorsement deals), unless you count Ciroc’s nearly $100 million deal to bring on Sean “Diddy” Combs as part-owner of its premium vodka for promotional value.

Hmmmm… “A price tag insiders have placed at?” I might have to side with the possibly inebriated Ramona on this one! Even so, cashing out a two-year-old company for $30 million is still jaw dropping! And to think, this is a woman who finished runner-up on The Apprentice: Martha Stewart. Gee, I wonder what winner Dawna Stone is doing these days? (Probably a guest on Not Gonna Watch What Happens Live!)

LHHH Is Princess Love pregnant? Here’s all the tea we have (so far)