Anyone who has paid attention to the walls in Kim Zolciak’s house knows the reality star loves to find a reason to take her clothes off and pose for studio portraits, and why should getting married be any different? As a wedding gift for her husband to be, Atlanta Falcons defensive end Kroy Biermann, Kim decides to go topless and have his number 71 Atlanta Falcons jersey body painted on!

The photoshoot, with The ATL’s photographer to the stars Derrick Blanks, happens in the midst of numerous pre-wedding crises, but nothing is going to stand in the way of a sexy Kim Zolciak photoshoot!

“I was so excited to do this photoshoot for Kroy,” Kim says in the clip. “But with my yard a mess, no flower person for the wedding, Jen being MIA, this photoshoot is the last I have on my mind. But, I’m so damn sexy, f*** it! I just say ‘cheeeese.'”

And just so that you can’t say Don’t Be Tardy For The Weddding didn’t teach you anything, did you know that nipples come in two sizes: raisins and gumdrops, and Kim has… ***DUM DUM DUMMMMM*** raisins. And before you get all worked up about safe for work issues, it should be pointed out that Kim’s raisins are covered in pasties and paint – so there are multiple layers of protection for your eyes.

Here are a gallery of Kim Zolciak topless body paint photos from the episode as she transforms herself into the ultimate Kroy toy! (Click thumbnails to enlarge) 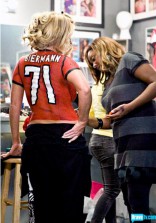 Catch more of Kim (though I can’t see how you could catch more of her without it being rated R) on Don’t Be Tardy For The Wedding Thursday nights at 9:30/8:30c on Bravo!