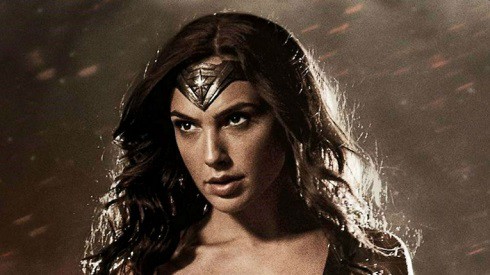 First, check out the sneak peek of the “feminist cultural icon” and her story below:

According to Geoff Johns, Chief Creative Officer of DC Comics, Wonder Woman “is the best fighter in the DC universe. She has strength and speed and she’s been training her whole life for war.” Move over, Batman and Superman — there’s a new superhero in town!

Wonder Woman’s like one of the greatest superheroes out there, but people don’t know her origins like they know Superman’s origin and Batman’s origin. So, what we want to do in the film is really tell people who she is, where she comes from and why she does what she does.

For the uninitiated, the movie will explain Wonder Woman’s mythological Amazonian background (she’s Zeus’s daughter!) and how she differs from the more shoot-em-up antics of her male DC teammates. According to Johns:

These Amazons were once created to protect man’s world, but they’ve since abandoned it. Diana is asking constantly, ‘Why don’t we go do and created to do and protect man?’ They say, ‘Because they’re not worth it.’ And this takes her on a journey into our world…She stands for equality, and that’s really important. I think that’s why people love the character.

Director Ava DuVernay, who was originally connected to Marvel’s Black Panther movie but passed due to the delightfully vague “We had different ideas,” is totally stoked about Wonder Woman, directed by Patty Jenks:

Wait. One. Sec. Whew. Gotta catch my breath. That footage took it away! Directed by @PattyJenks! Yes! #WonderWoman https://t.co/GqEwCwck9n

She’s in good company, as fans have already been lighting up the social media sphere with excitement:

Actually can’t fucking handle my Wonder Woman feelings right now. Might read the Simone or Rucka run on my phone, or watch some vids.

I am so excited for this #WonderWoman https://t.co/FP0GHSZWb5

We Finally Got Some Wonder Woman Footage And I’m Fired Up https://t.co/1p2m3o9Ucw

I know I’m late to the party but the Wonder Woman footage is more exciting than the entirety of Man of Steel! Can’t wait!! ??

Comic book writer Gail Simone took the opportunity to post an entire litany of Wonder Woman tweets–and does she ever have opinions on the subject:

Boy, do I have a lot of thoughts on that Wonder Woman footage.

Everything Geoff said was true and correct, but it was what the director said that I found most encouraging.

Why? Because she used ‘kind’ and ‘loving’ in a sound bite about a DC superhero. That is practically an act of revolution.

Kindness is fierce and difficult. Loving is badass. Huge kudos to the director for bringing that up.

So, dear @PattyJenks and @galgadot, I am glad Diana is in such good hands. Knock it out of the park for us all, okay?

No superhero character’s name encapsulates what they should be more. It’s WONDER. WOMAN. Get those two things right and you’re IN.

This is my last Wonder Woman thought today…everyone who has worked on her book knows this feeling. Diana isn’t like other heroes.

Wonder Woman is a character who transforms readers. Not everyone gets her, not everyone likes her. But…

…there are people all over the world who lean on Wonder Woman in a way I haven’t seen with any other heroes, not at that level.

A great movie could do amazing things, not just for DC, not just for comics, but for the very concept of how we portray female heroes.

That’s why it’s a big deal, and that’s why it has to be Wonder Woman.

If June 23, 2017 seems too far away, don’t worry: we’ll get our first glimpse of Wonder Woman on March 25 in the long-awaited Zack Synder flick Batman v Superman: