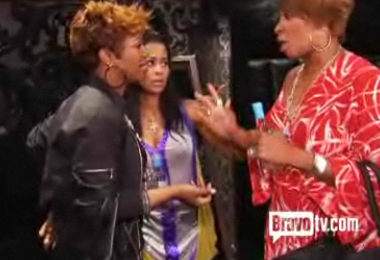 On the last episode of Real Housewives of Atlanta, Nene managed to steal Sheree’s spotlight (actually not hard to do) at her “Independence Party” by fighting with both Kim and Kandi separately over not being included on the soon-to-be-Grammy-winner “Tardy for the Party.”

I’m gonna just say it, Nene’s charm has worn off. When I first came to know her on TV, she was brassy, bold, and twinkled when you held her to the light just right. However, after being worn too much, she started to tarnish, turned my finger green, and showed her true colors.

Last season on Real Housewives of Atlanta she came off as more genuine than some of the other girls, namely Kim and Sherree. She was funny, especially when she nailed an impression of Kim’s shoddy singing abilities. Since then, she’s been showered with praise from everyone from posters on the Television Without Pity message boards to Anderson Cooper, and it’s gone to her head in the worst way. Couple that with the inclusion of Kandi Burruss, who is the most sane and reasonable person ever cast as a “Housewife,” and Kim acting less delusional this season, and Nene comes off acting like a hot mess.

Kandi is a little boring sometimes, but she is the one girl with a head on her. She’s not the most talented singer or songwriter who ever walked the earth, but the girl is competent and productive. She also treats others with respect and evaluates situations with a logical mind. So, when Nene got in Kandi’s face, it was time to really say goodbye to team Nene.

I’m even on Kim’s side concerning this whole argument, mostly because I don’t understand why Nene was so keen on working with Kim in the first place. She spent all of last season blasting Kim about her singing, and now she wants to record with her?? Nene is getting inconsistent fast. The song wasn’t great, but the end result was something that glittery boys would sweat to in the club (I would too after about three shots). Of course, Kandi is the only one to credit for the song’s listenability. She gave it a nice beat and melody that Kim wouldn’t really have to sing to.

Watch the videos of the fights after the jump: