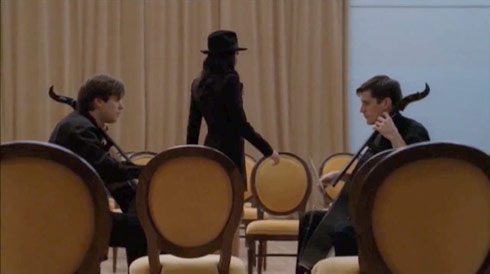 Next Tuesday Glee will air its much-anticipated Michael Jackson tribute episode simply titled “Michael.” In a preview clip released last week we saw a three-second glimpse of Santana (Naya Rivera) and Sebastian (Grant Gustin) performing a cover of Jackson’s epic “Smooth Criminal,” and now we have the entire thing in all of its double-cello, sexual tension glory!

I’m a sucker for a cello (not to mention two!), I’m a sucker for “Smooth Criminal” (I still remember the epic television event when it was released!), and I am a sucker for Naya Rivera, who has her usual aggressive sexy mojo while at the same time being absolutely fedorable.

And JUST IN CASE there are actually some readers out there who have never witnessed the pinnacle of the King of Pop’s cinematic theatrics, here is pop music’s “Untouchable” Michael Jackson being his mafi-oh-so magical self in the video for “Smooth Criminal:”

UPDATE – Here are audio clips of all the Glee Michael Jackson episode performances! (Thanks to fyeahgleeclub.tumblr.com)

I Want You Back (Warblers)