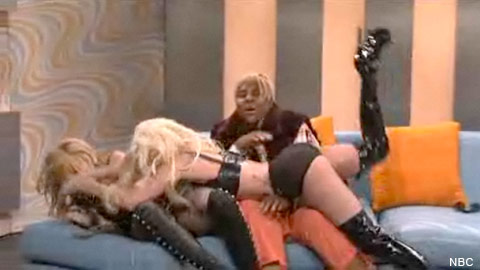 Saturday Night Live was chock full of surprises last night, with guest appearances from Scarlett Johansson, Elijah Wood and Darrell Hammond. But, the biggest surprise was the appearance of the reigning Queen of Pop Madonna in a skit with her rumored heir Lady Gaga. Here they are on the Hip Hop MTV4 show Deep House Dish hosted by SNL staple Kenan Thompson:

It was exciting seeing these two blonde pop divas decked out in leather and pulling each other’s hair! Sadly, it wasn’t really all that funny. It was just Kenan playing that same loud wide-eyed character he always plays and another cast member on the side with funny hair and a prop.

Anyway – when is it going to be announced that Madonna will be replacing the recently ousted Kanye alongside Gaga on what will be become the highest grossing concert tour of all time? The Lady Gadonna tour! Ah Hell, I’d go!

Check out more details about the Madongerie and Lady Gagangerie battle royale and see more photos of the Material Girl over at PopEater.com!