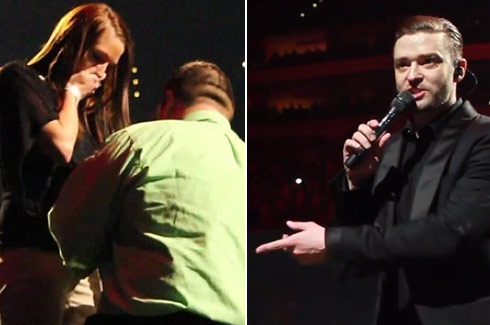 A guy with either some genuinely good luck, or better connections, reached out to J.T.’s camp in November asking if he could get an assist in proposing to his girlfriend Kim during the show. Timberlake not only obliged the guy’s request he had his crew tape the moment and he posted it to his YouTube account.

Justin halted his show after finishing the song “That Girl” and brought the lovebirds on stage.

“Josh and Kim, why don’t you make your way up here? Josh called me earlier. He’s got something he wants to tell you,” Justin stated to an overwhelmed Kim:

Timberlake not only escorted Kim on stage with his hand like a true southern gentleman, he also positioned the couple appropriately for the big moment.

It’s hard to make out what Josh said exactly because of all the screaming fans but from the big ol’ kiss and Justin’s applause we’re assuming Kim said, “Yes!” 🙂

Lauren Conrad opens up about her break-up from Kyle Howard