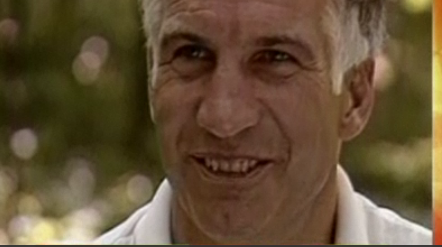 Jerry Sandusky, the child molester at the heart of the Penn State scandal, met all the boys he who testified that they were sexually abused through a charity foundation he founded in 1977 called The Second Mile. It was set up to help disadvantaged children, but ended up being about NBC has a now-chilling interview from 1987 with Sandusky about why he loves working with children.

He’s currently out and about, TMZ has a shot him noshing on donuts at the airport. The judge (Judge Leslie Dutchcot) who let him free without having to post bail, and without the ankle bracelet requested by the prosecution happens to have volunteered for The Second Mile charity, but after Sandusky was no longer involved with it. Sandusky has been charged with 40 criminal counts, and 8 boys have come forward with claims of sexual abuse.

“I enjoy being around children. I enjoy their enthusiasm I just have a good time with them. Everybody needs people to care for them. Sometimes they don’t want it. Sometimes they don’t understand what you’re trying to do, but they want to be disciplined. Kids are growing up awfully fast today.”

He also talked about developing trust being one of the biggest priorities of The Second Mile:

“One of the biggest things would be the trust that would be developed. What we’re trying to be is a true friend.”

MUG SHOT Jerry Sandusky arrested, has not made bail