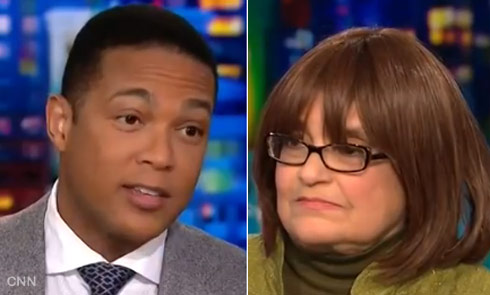 CNN’s Don Lemon interviewed Bill Cosby rape accuser Joan Tarshis last night. While doing so he provided a tip on how to avoid oral sex that appeared so insensitive and thoughtless that many folks via social media are now calling for him to be fired.

Tarshis came forward over the weekend claiming that she was sexually assaulted by Cosby as a 19-year-old aspiring actress in 1969. She said that Cosby lured her to his bungalow at Universal Studios, drugged her and then forced her to perform oral sex on him.

Cosby has been under fire over multiple allegations – via The Atlantic:

Tarshis is the fifth woman to publicly accuse Bill Cosby of raping her. There is now a sixth—model Janice Dickinson. In a civil suit brought by Andrea Constand, some 13 women were set to testify that Cosby had raped them too. They ultimately did not testify because Constand settled with Cosby. Tarshis says she was not among those 13, and so the total number of accusers appears to now stand at 15 including Dickinson.

Here was the exchange on CNN:

Lemon: Can I ask you this? And please, I don’t mean to be crude, OK?

Lemon: You said this last night, that he — you lied to him and said, “I have an infection, and if you rape me, or if you do — if you have intercourse with me, then you will probably get it and give it to your wife.”

Lemon: You said he made you perform oral sex.

Lemon: You — you know, there are ways not to perform oral sex if you didn’t want to do it.

Tarshis: I was kind of stoned at the time, and quite honestly, that didn’t even enter my mind. Now I wish it would have.

Lemon: Right. Meaning the using of the teeth, right?

Tarshis: Yes…I didn’t even think of it.