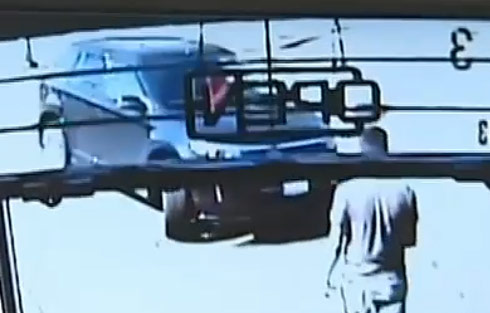 When KIRO out of Seattle did a news report about an SUV that was stolen with a 10-month-old baby inside that included video of the abduction, it became clear that the bigger story to most viewers was the father’s decision to leave the child in the car and his seeming lack of action when he realized what was happening.

Chris Kallin left his baby girl in her car seat with the vehicle running as he made a stop at a local convenience mart. As he made his way back to the Ford Edge a man walked up, got in the driver’s seat and drove off with the infant still inside.

In the surveillance footage Kallin appears at a loss as he walks out to the car. He does not attempt to stop the car or make any physical move to prevent the thief from getting away.

Feedback of the story from KIRO’s Facebook page was fast and furious as people were highly critical of Kallin’s decision to leave his child in the car and then his seeming lack of desire to try and stop the perpetrator.

KIRO followed up with Kallin, who expressed regret about what he did while trying to explain what was happening during the video. He said he’d been running errands, that his daughter was asleep and that the convenience store was the last stop – just a half-mile from his home.

Kallin said, “I made a decision for my daughter’s comfort instead of her safety.” He stated that he was yelling at the man, Estevan Lucio Sanchez, “Don’t steal my car, my baby’s inside!,” adding, “It was the most horrific thing you could possibly imagine.”

The father, who police have said will not be charged with any crimes, said that he was initially in shock and that he tried to press the alarm on his car’s keyless entry before finally running after the SUV.

Sanchez abandoned the vehicle shortly thereafter and Kallin’s daughter was recovered safely. Sanchez was charged with kidnapping and theft.

Another day, another Florida back alley buttocks injection scandal