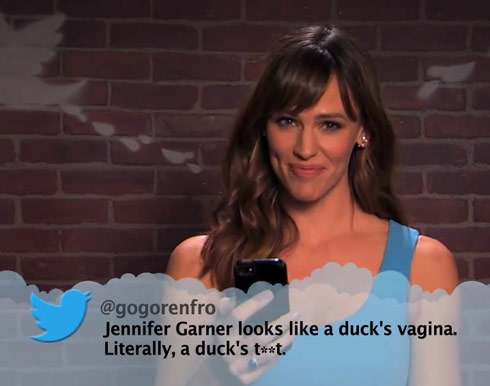 As a teary-eyed Jay Leno said goodbye to late night again last night to the crooning of Kim Kardashian, Jimmy Kimmel stuck to what he does best and aired another funny clip of celebrities reading mean tweets about themselves.

This time around Jimmy managed to round up some serious stars like Tom Hanks, Joseph Gordon Levitt and Jon Hamm as well as his featured guests from last night, the cast of The Monuments Men, Matt Damon, Cate Blanchett, George Clooney, Bill Murray, John Goodman and Bob Balaban.

Hilarious! I think it’s pretty interesting to see the names tagged and identified in regards to who sent the tweets so I did a little leg work and here’s some replies after these folks appeared on national TV – sort of:

yes, I am excited.