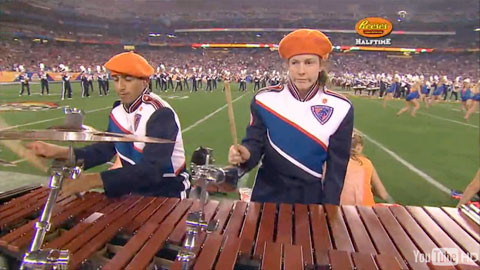 The 2010 Fiesta Bowl was the first ever non-championship BCS Bowl Game to feature two undefeated teams – The 12-0 TCU (Texas Christian University) Horned Frogs and the 13-0 Boise State Broncos, and though it was a great game that turned on a beautiful Boise State fake punt in the fourth quarter, all everyone is talking about the morning after is the seemingly sad Boise State Cowbell Girl featured in the televised coverage of the Boise State’s band performance at halftime:

There was a great deal of talk about the seemingly despondent and Will Ferrell-esque cowbell player over on SBNation.com, which was eventually resolved when a Boise State student and a Chicago Sportswriter revealed to the site that the girl is blind. The internet’s fascination with BSCC has remained, but it has shifted from humorous to curious as comments shift from LOL to WOW! But, not before internet funny-makers had already had their way with the clip, including this Blue Oyster Cult mash-up in honor of the Will Ferrel and Christopher Walken SNL skit:

Here is the animated gif that went viral before the Fiesta Bowl was even finished (which Boise State won, by the way.)