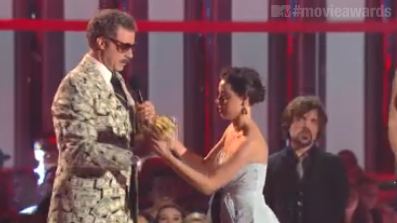 Last night at the MTV Movie Awards Aubrey Plaza awkwardly interrupted Will Ferrell’s acceptance speech for the “Comedic Genius Award” with whiskey on her breath and the title of her latest movie written on her chest.

A barefoot Aubrey with a drink in her hand tried to grab Will’s award. When he wouldn’t let it go, she sheepishly walked back to her front row seat and spilled her drink on the floor. Will didn’t miss a beat, saying “Aubrey Plaza, everyone. Just like we rehearsed it. Perfect, it was perfect. Not too long, not too short. Right on the money.”

While MTV awards shows are known for staged antics that can feel pretty awkward, (Will actually brought up a fake family for a vowel renewal on stage after Aubreygate,) it turns out this wasn’t planned. Producers kicked out the Parks and Recreation star moments after she sat down, and Will noted her “hot liquor breath” in an after interview.

“And I think she wanted to tell me something important, but there was no message. It was just a lot of hot liquor breath. And, then, and a little bit of sweat. And then she ran away. But the ship sailed on.”

Aubrey joked about the incident on Twitter: “thanks for the advice @kanyewest went better than planned! #mtvmovieawards #chrisbosh #thesecret”

Unlike Kanye’s moment, Aubrey’s attention grab seemed to be part of the show, and definitely got some coverage of her new movie The To Do List, which is due out this August.

VIDEO PHOTOS Lisa Vanderpump in a bikini on ‘Silk Stalkings’ 1993