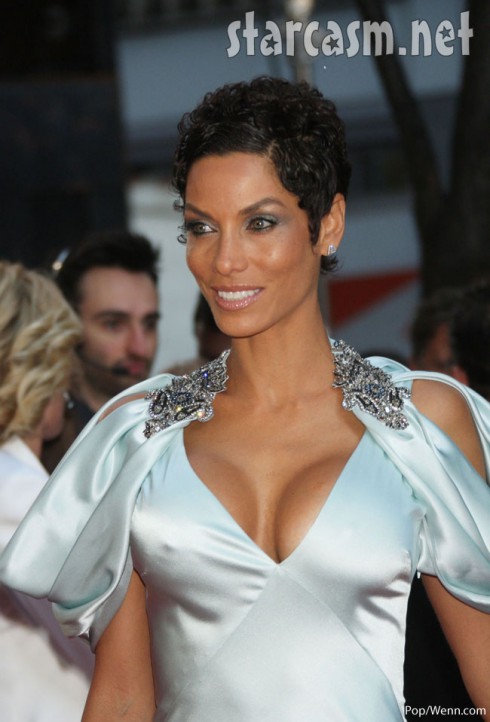 On the premiere episode of VH1’s Hollywood Exes we see Eddie Murphy’s ex-wife Nicole Murphy (44) talk about how she was allegedly defrauded out of a lot of money.

45-year-old Troy David Stratos, a self-described Los Angeles entertainment entrepreneur, allegedly stole $7 million from Nicole. He was arrested December 20, 2011 and charged with 11 counts of wire and mail fraud, two counts of money laundering, and one count of obstruction of justice.

Prosecutors claim Stratos told Nicole that he would earn her more interest on her money by investing it overseas. But he never invested the money, and instead allegedly spend it on a lavish lifestyle. He also allegedly convinced her to buy luxury cars to park outside of her house to help increase the curb appeal so he could sell it for her. Nicole was living elsewhere, and was under the impression that he knew some Middle Eastern royal families who would be interested in the property. But he didn’t try to sell the house, and instead lived a luxurious lifestyle with the house and cars.

“Our investigation has been underway for a while. Unfortunately, as with a lot of these fraud schemes, by the time the victim is aware or has suspicions of fraud, a lot of the money has already been entrusted to the fraudster.”

If convicted, Stratos could face up to 20 years in jail for wire and mail fraud charges, and 10 years for money laundering and obstruction of justice.

Nicole was married to Eddie Murphy for 13 years, and has five children with him. She’s currently engaged to New York Giants’ Michael Strahan.

The defendant was arrested and made an initial appearance before a magistrate judge in the Central District of California on December 20, 2011. The government moved for detention and further proceedings were held on December 21, 2011. After hearing, the defendant was ordered detained and transported to this district. Order filed December 22, 2011, Dckt. No. 8 (citing the nature of the offenses, the defendant’s prior extended international travel and insufficient bail resources). The defendant’s initial appearance in this district occurred on January 11, 2012, at which time he was informed of his rights, the nature of the charges and the potential penalties. Further arraignment was put over to January 12 so that his retained counsel could be present.

The defendant was arraigned on January 12, 2012, at which time he sought release on conditions and the government continued to argue for detention. A detention hearing was held, and at defense counsel’s request a further hearing on detention, including an evidentiary hearing, was set for January 13, 2012.

At the January 13 hearing, the court noted its initial impression, indicating that it was bothered by the details of the arrest, as communicated to the Pretrial Services Office in Los Angeles, indicating that the defendant was hiding to avoid arrest. The court also expressed concern over the defendant’s extensive and prolonged travel (living in several locations in Europe, the middle east and Canada for over three and a half years). The court also indicated its strong concern over the information in the Pretrial Services report that the defendant was in receipt of over $10 million of a Canadian citizen’s money with no accounting of the whereabouts of those funds. Additionally, the court expressed concerns over the defendant’s lack of candor with the Pretrial Services Officers regarding the identification of assets, and the lack of strong ties to the persons who were offering to post collateral.

The defendant presented the testimony of Viive Truu, who testified that she lent the defendant either $10.5 or $11 million; she was unsure of the exact amount. She was clear that these funds were not a gift but rather a loan and that the defendant was to pay 6% interest on the principal. Although she is a resident of Canada, she purports to know the defendant well and trusts him, and she does not think he would be a flight risk.*fn1 She volunteered that she did wonder about his credibility, and, indeed, his true identity, during a period of time he was incarcerated in France for an alleged fraud, but she now believes his representations. She testified that defendant was about to make a $1 million payment to her the week he was arrested in December of 2011, but was unable to do so because of the arrest.*fn2 She said they had previously been negotiating over how to get the loan paid prior to his incarceration in Paris, and that arrest, too, interrupted those negotiations.

The defendant, after having been informed of his right to remain silent and with the consent of his retained counsel as stated on the record, requested to make a statement and his sworn testimony was taken over a two day evidentiary hearing.*fn3 Defendant stated that he was not avoiding arrest when he was found in the closet but rather had been ill and was simply trying to get dressed. He explained that his witness, Ms. Truu may have been mistaken as to some particulars but provided no specifics.

The defendant stated that, if released, he intends to pursue closure of a Facebook stock or securities transaction involving several million dollars in which claims that he is the finder for buyers and unnamed sellers *fn4 The buyer(s) has deposited large sums of money with the defendant and, defendant testified, he needs to close that deal. He also stated that he would be very transparent in his dealings in that regard. However, cross-examination of the defendant demonstrated the opposite. He was questioned about text messages to the purported buyer that the defendant recently dictated from the jail. The text message included the false representation that the message was from a person named Ken Dennis, rather than the defendant, Troy Stratos. He was also questioned about a representation in the text messages that the reason the Facebook deal has not moved forward is because the defendant is currently traveling. Rather than denying the false representation, the defendant insisted that the misrepresentation was irrelevant because Mr. Dennis is the CEO of Soumaya Securities, LLC. When reminded that he has just previously testified that Soumaya Securities, LLC had no officers or employees other than the defendant, he provided a lengthy and largely non-responsive explanation that obfuscated rather than clarified, and certainly did not demonstrate a willingness or ability to be candid, transparent and cooperative with pretrial release conditions pertaining to financial transactions or communications with victims of fraud.

Given the large sums of other people’s money that have come into the defendant’s possession, and the apparent ease with which that has occurred, the nature of the allegations in the indictment, the troubling testimony regarding Ms. Truu’s funds and the recent representation to Ms. Truu that, but for the defendant’s recent arrest, she would have received in December a payment of $1 million of the approximately $11 million she is owed, the recent lie defendant communicated in the alleged multi-million dollar Facebook stock deal the defendant is attempting to close from the jail, and the defendant’s evasive and contradictory answers on cross-examination, I find by clear and convincing evidence that there presently is no condition or combination of conditions that will protect the victims and intended victims from continued fraudulent representations and transactions by the defendant.

I further find, by a preponderance of the evidence, that there is no current credible release plan proposed that would include conditions or a combination of conditions that will mitigate flight risk and reasonably assure the appearance of the defendant. The defendant’s step-mother, Ms. Wilson, informed pretrial services that she would be willing to post some of the equity of rental property she owns for a secured bail bond. However, she indicated that she would not be willing to post her primary residence because “it was her home and it was paid for.” January 12, 2012 Pretrial Services Suppl. Bail Mem. at 4 – 5. As for the rental property, she initially stated that she would only be willing to post $100,000 of the approximately $430,000 of available equity, but then on reconsideration raised the amount to $200,000.*fn5 Id. Moreover, the report indicates that when the Pretrial Services Officer looked up the property she noticed that it was for sale. Id. at 4.

As for the primary residence, the explanation for Ms. Wilson’s unwillingness to post it has changed. Notwithstanding the prior representation to the Pretrial Services Officer that the home was “paid for”, counsel represented at the evidentiary hearing that Ms. Wilson now has recently learned that the home had no equity. No explanation was offered for the prior statement, whether it was truthful when made, and if the property had equity where it went. Regardless of the changed representation, Ms. Wilson, the one individual offering to post property for whom the defendant appears to have close ties, initially indicated that she did not trust the defendant enough to risk her home on his future appearances. Given the inconsistent reasons stated for the motive of Ms. Wilson not to risk her home as collateral for a bond, and the uncertain or apparent lack of accurate information to date on the encumbered or non-encumbered status of that property, it appears that there is little, if any, significant assets from the one person with significant ties to the defendant being offering to post property to mitigate the risk of flight. The equity from the rental property that was, but apparently is not now, up for sale simply loses any significance in light of the amount of funds that defendant, by his own admission, has obtained from others and has not accounted for.

Finally, the three vehicles offered as security (an Audi R8, a Range Rover, and a Camaro) do not significantly change the analysis given the sizable sums of money that have not been accounted for.

In light of defendant’s three and one half years of living in other countries, the large sums of funds that are currently not accounted for, and the defendant’s evasive testimony at the evidentiary hearing, there currently does not appear to be a condition or combination of conditions that will reasonably assure the appearance of the defendant.