A music teacher in Wasilla, Alaska claims that he had conversations with Sarah Palin in 1997 in which she stated she believes dinosaurs and men coexisted 6,000 years ago. 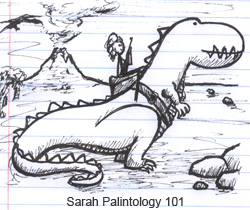 Philip Munger, who teaches music at the University of Alaska in Anchorage in addition to being a political blogger, says the subject came up when he asked her about her religious beliefs. Palin told him that she believed people and dinosaurs were around at the same time and that she had seen pictures of human footprints inside dinosaur tracks.

Wow! If she somehow gets anywhere near the presidency we’ll have to hope America’s enemies don’t have mud and cameras.

(Starcasm.net researchers scoured the Old Testament for dinosaur references but the only thing we found is Abraham’s father Terah, which only helps if we can prove his last name was Dactyl. Hang in there Sarah! We’ll save you somehow!)

VIDEO Sarah Palin is Gun-Ho? What does TWILF mean? “The Stupid Virus” cartoon