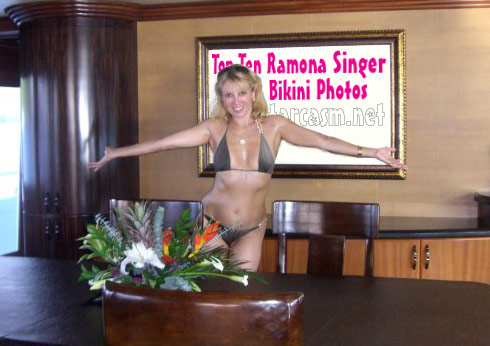 And don’t think for a second Ramona doesn’t know this – she is, after all, the one who has put all the effort into getting that fantastic bikini bod! As a result, there are lots and lots of photos of Ramona wearing every man’s favorite little article of clothing on various sites all over the webs – something I discovered while working up my Ramona vs. Cameron Diaz post a few weeks back. (Which had quite the surprising outcome, btw!)

Since I had already compiled a large archive of Ramonakini pics I thought I might do what bloggers do and create a Top Ten list! So, without further ado, I present the Top Ten Ramona Singer Bikini Photos from around the web! 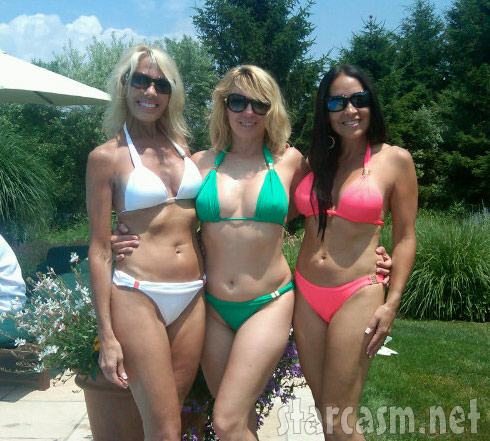 Ramona and a couple of her lady friends pose together and although they clearly have Ramona beat as far as GTL goes, they just can’t compare to the all-natural hawtness of Mrs. Singer! 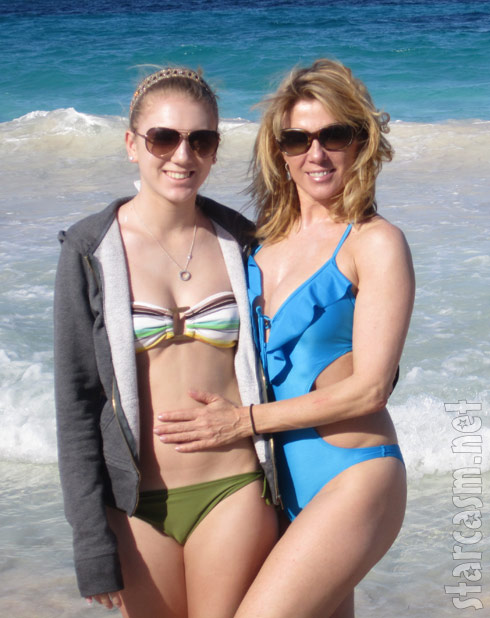 Like mother like daughter – Ramona Singer posed with her lovely daughter Avery Singer for this sensational generational swimsuit photo! Avery seems like a sweetheart and I just love watching her and Ramona together on the show – she handles her mom’s adoration with a lot more class than most of the Real Housedaughters. (This photo probably would have ranked a lot higher except for the fact that Ramona isn’t technically wearing a bikini. BUT, Avery is, so I felt I could get in on the list because it is technically a Ramona Singer bikini photo – it’s just not her wearing it!) 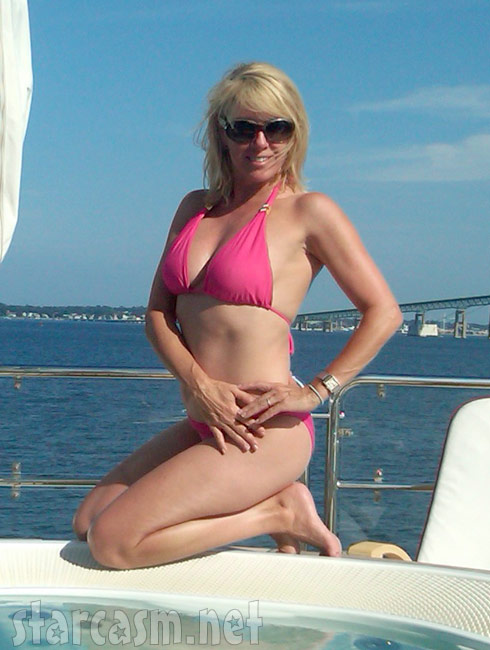 Ramona poses poolside in what looks like the result from an early episode of ANTM. Don’t get me wroong – Ramona’s lookin’ great as usual, but it seems like she’s trying just a bit too hard. (Push that chest out! Excellent. OK, now put your hands on your hip. Good. Straighten your back. Perfect! I think that’s a wrap.) 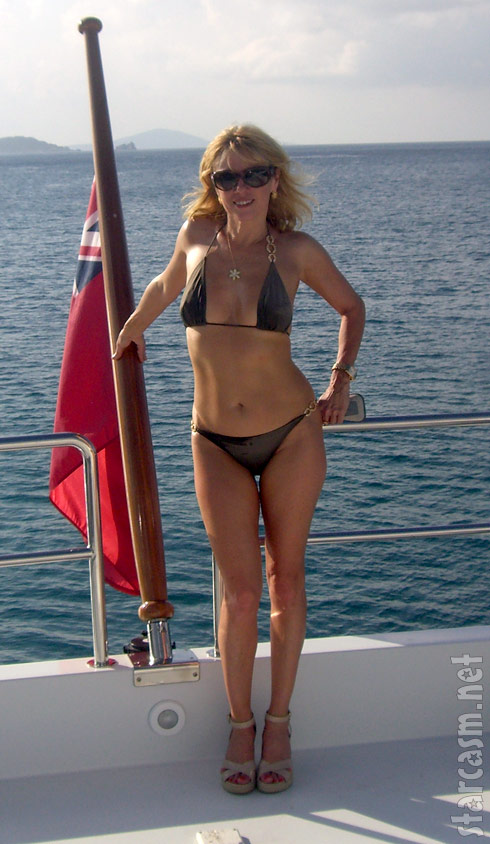 This is the first jaw-dropping image in the countdown. Here we get to see Ramona in all her bikini glory without anything or anyone or any pose causing a distraction. I’m particularly fond of this image because it is so similar to one of Camille Grammer’s Playboy photos from back in the day and it just shows how much classier Ramona is! 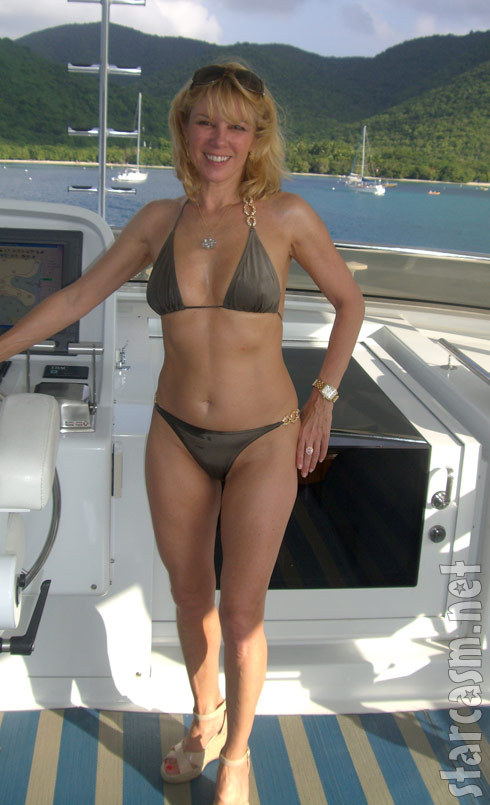 This is a companion photo to the previous one, obviously taken on the same trip and on the same boat. You know, it really is amazing just how small bikinis are isn’t it? There’s almost more skin being covered here by Ramona’s lovely True Faith jewelry now available at TrueFaithJewelry.com! (Heh heh – love ya Ramona! Sell that bling girl!) 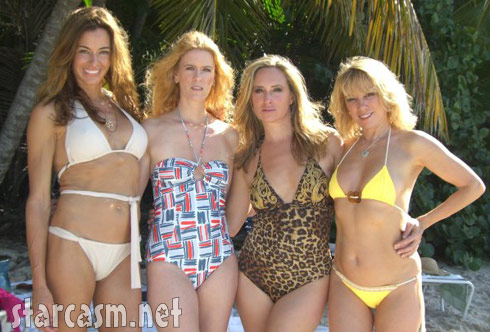 Following on the heels of the Ramona boat doubleshot we have another tandem of images coming in at number 5 and 4 respectively. These feature Ramona along with some of her Big Apple cast mates – all looking fab in various swimwear style. This one includes another bikini maestro in the form of Kelly Bensimon as well as model Alex McCord and the always purrrrrrrfect Sonja Morgan rocking an animal print one-piece! Ramona shows off the most by wearing the least in the form of a teeny tiny bright yellow bikini that could very well be the inspiration for a song! 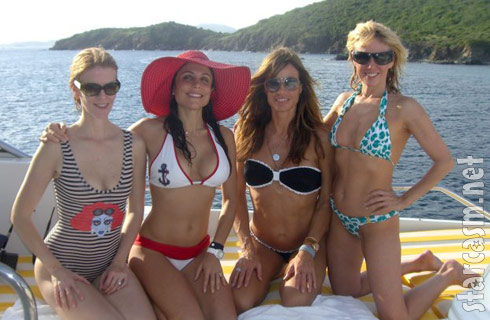 In this Real Housewives of New York City bikini group shot Sonja is traded out for Bethenny, who shows off her skinny girl self as well as her Big Apples in a marine-themed red and white bikini that looks a bit like intimate apparel below deck. (Nobody’s complaining!) Alex is sporting a one-piece with a funny female face print and Kelly Bensimon is rocking a racy, lacy black and white two piece that looks like it was taken right out of the Victoria’s Secret catalog! Ah, but alas, none can compare to effervescence of Ramona Singer, who towers above the competition in an aqua animal print bikini that takes it real easy on the imagination! 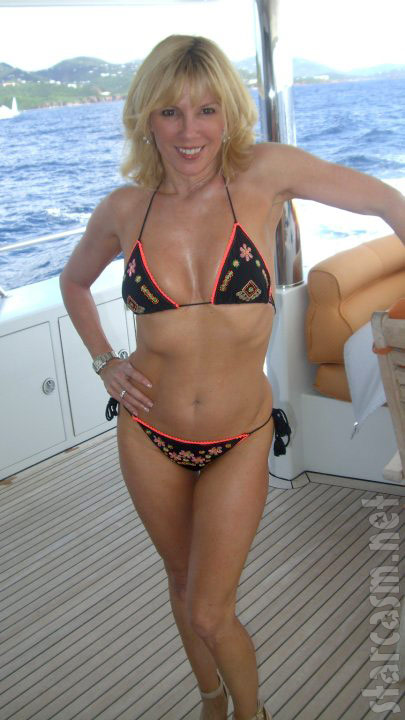 I love this shot because it is brassy, sassy and stiiiiiiiiill classy! That there is confidence my friends – and as you can tell from this photo, confidence can be mighty fine! I have no idea what kind of bizarre pattern that is on her bikini, but it ABSOLUTELY DOES NOT MATTER. She could have been wearing McDonald’s cups in this photo and would have looked fantastic! 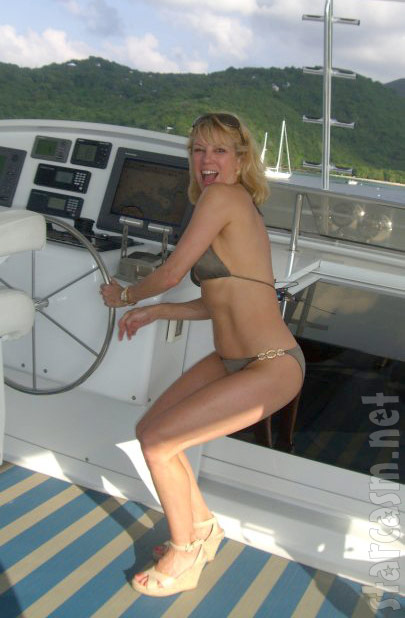 At number three we got to see some of Ramona’s confidence, but here we get to see the crazy fun side of Ramona! I’m thinking she may have had a bottle or two of her bikinot grigio by this point, and I can’t imagine it’s a good idea to have her behind the wheel, but that’s what you get sometimes with Ramona! All I can say is that you shouldn’t waste your time trying to figure out which way she’s gonna swerve and just go ahead and get outta the way! 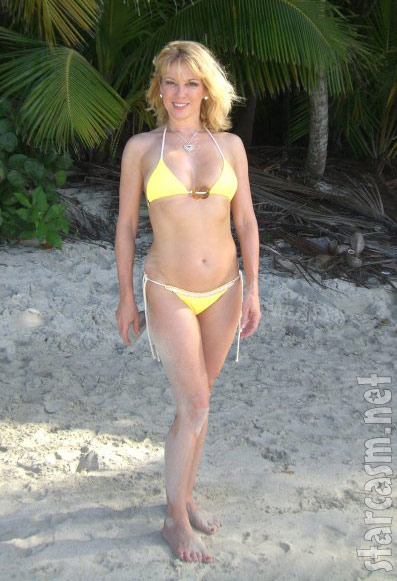 Wow. Perhaps I’m partial to this particular photo because it was the one I used in the Ramona Singer vs. Cameron Diaz comparison post in which I realized for the first time just how amazingly fit Ramona is. Or perhaps it was because this picture was taken while filming a scene for The Real Housewives of New York City that we got to see last season. Or maybe it’s just because Ramona looks absolutely scrumtrulescent! She’s fun (is that sand on her leg?), she’s confident, she’s lovely… Ahhh why am I beating around the bush here? That woman is sexy y’all! (I will refrain from a low-brow “riding the Ramonacoaster joke here.)

Thanks so much for checking out my list! I’m sure Ramona will be sharing more photos over the next few years so it may become relatively obsolete, but that still won’t take away from the impact of such an impressive portfolio! (Ramona – if you have any other photos laying around you’d like me to substitute, send ’em to me and I’ll see what I can do)