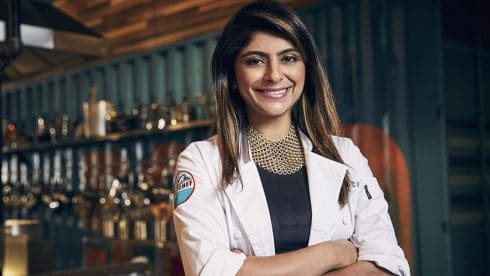 29-yera-old Season 15 fan favorite Top Chef contestant Fatima Ali revealed that her cancer has returned and she only has a year left to live. In a moving essay for Bon Appetit‘s Healthyish blog, Fatima shares what she plans to do with the time she has left after such a devastating diagnosis.

“The cancer cells my doctors believed had vanished are back with a vengeance in my left hip and femur bone,” she wrote for Bon Appétit’s Healthyish. “My oncologist has told me that I have a year to live, with or without the new chemotherapy regimen. I was looking forward to being 30, flirty, and thriving. Guess I have to step it up on the flirting. I have no time to lose.”

“It’s funny, isn’t it? When we think we have all the time in the world to live, we forget to indulge in the experiences of living,” Fatima writes. “When that choice is yanked away from us, that’s when we scramble to feel.”

Fatima shared that she plans to cram as much love and experience as she can in the coming months, including eating as much delicious food as possible “I am desperate to overload my senses in the coming months,” she writes. “Making reservations at the world’s best restaurants, reaching out to past lovers and friends, and smothering my family, giving them the time that I so selfishly guarded before.”

“An odd sense of relief has settled inside me, knowing that I can finally live for myself, even if it’s just for a few more precious months,” she explained about the new emotions she’s experiencing as she approaches the end of her life.

Fatima was diagnosed with Ewing’s sarcoma late last year and underwent surgery this January to remove a tumor from her should bone. She also underwent a boat of chemotherapy and the doctors thought she had successfully gone into remission. Unfortunately she was informed in September that the cancer had come back

During her treatment Fatima grew closer to Top Chef judge Padma Lakshmi, who shared this touching Instagram post about her friend.

Dear friends, I have seen @cheffati grow and blossom every day I walked into the @bravotopchef kitchen. I have seen Fatima’s ambition sharpen over weeks of competition, seen her soar along with all of you. Most of you will read Fatima’s writing for the first time in this @bonappetit piece. Since her diagnosis I have been fortunate enough to get to know her deeper and in a new light. Over these months, I have come to know her family. Her mother has shown me her older writing which is just as poignant. I am pleased to share my friend’s story with you all today. I am so proud of her. I can tell you that in these months I have not only seen her continue to find her voice, but been inspired by her exponentially. I have gotten to know most of her family and in them I see my own. I was in the hospital with her the morning she had surgery months ago and witnessed her courage. The day after my @nytimes piece came out, I went to see her, and she cheered me on by holding my hand from the hospital bed, assuring me I had not flayed myself in vain. I was with her last night as she went in for radiation and she still turned back to smile at her mother and me when the nurse with the wheelchair came. I hope that this year brings her as much as she can hope for. You’ve said on the show that growing up I inspired you. But Fati, now, it’s you who inspire me. Everyday. I love you Fati. Link in bio.

Shannen Doherty confirms cancer diagnosis after it was outed by TMZ